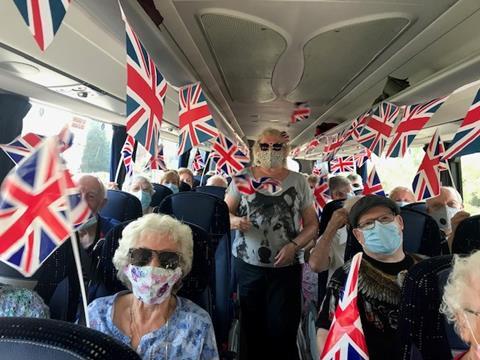 The day trip was initially planned for 6th May to celebrate the 75th anniversary of VE Day but had to be rescheduled due to the lockdown. The Coventry Wine Circle rearranged it for 12th August with 23 members attending.

Dunwood Travel helped June organise the trip, which included a coach journey through the attraction’s road safari, before a specially themed World War Two lunch and entertainment at the park’s Spring Grove House.

Have you been on your first trip for a while? We’d love to hear your experiences, please comment below.

Speaking to Group Leisure & Travel, 80-year-old June said: “When the coach arrived, Charlie the driver took all our temperatures with a little gun and then when we boarded the coach, which had a one-way system for entering and exiting, we wore face masks. 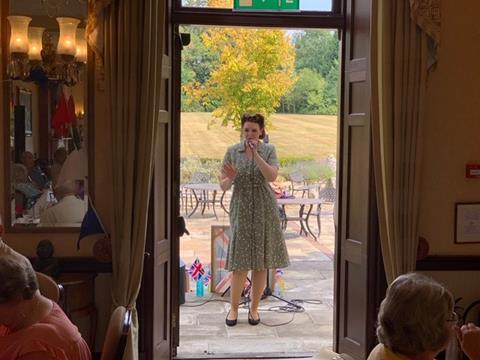 “The coach also had a special air conditioning system to keep the air inside as clean as possible – which was lovely and cool as it was incredibly hot on the day.

“Hand sanitiser was also given to us as we got on and off the coach, once again keeping everyone clean and safe.

“After an enjoyable drive around with the animals, we had our VE Day themed lunch with sausage, mash and peas, followed by apple pie and custard.

“There was also a retro singer who stood outside of the door so that everybody could see and not get too close. All the staff serving us wore masks and we all remained socially distant - we felt really, really safe.”

“Every one of my members on that trip came back to me and said that ‘it was just what we needed, when are we going again?’ I had 93, 94 and 95-year-olds who dealt with the strict measures and got around just fine. I feel like it’s the older ones who are ready to get back out there, we certainly felt safe, especially with our masks on.”

Getting back out there

Following on from the trip, June has now booked a Turkey & Tinsel break on 30th November to Bembridge Coast Hotel in the Isle of Wight, as well as Afternoon Tea at Inglewood Manor in Cheshire.

June continued: “After West Midlands Safari Park, I’ve been in contact with people who didn’t make the trip and they feel like they’ve missed out and are keen to try the next one. I’ve already got 20 interested in our next day trip to Inglewood Manor so I think most of my members feel ready to get back out there again.”

“A lot of my members were a little sceptical before the trip but when they came along, and had fun on the day, they were all so pleased they had taken part. Dunwood have gone above and beyond to make their coaches safe. I can’t speak for other operators but they were absolutely fantastic.”

June joined the group in 1978 and has been secretary for most of the time since then, organising day trips and holidays across the UK and Europe. The group were brought together by their love of wine, orginally home brewing bottles and selling them on. Today, the group is more of a social club and has more than 40 members.