Dolly Parton’s 9 to 5 the Musical will travel to a host of different venues across the UK from May 2020 following this year’s sell-out run. 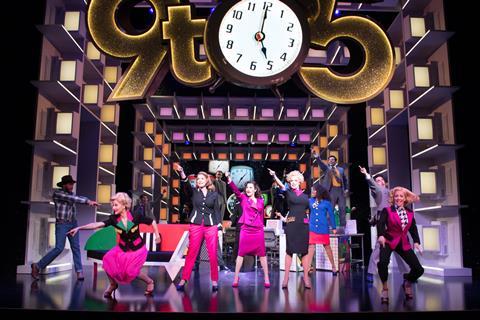 The West End cast of 9 to 5 the Musical.

The hit musical will open at Aylesbury Waterside Theatre on 29th May 2020, returning for a second time due to its popularity.

Its stint in Aylesbury will come to an end on 6th June, before taking to the road to perform across England at Wolverhampton, Nottingham, Southampton, Leeds, Plymouth, Stoke-on-Trent, Southend, Centerbury, Bristol, Manchester and Sheffield.

It continues to play at The Savoy Theatre in London’s West End where it is booking until May 2020, featuring Caroline Sheen, Chelsea Halfpenny, Natalie McQueen and Bonnie Langford.

David Hasselhoff recently took over from Brian Conley as Franklin Hart Jnr in the West End production too, playing the part until 8th February.

Casting for the tour will be announced soon.

9 to 5 the Musical opened in February this year, with Dolly Parton herself joining the cast on stage for the final number at the London premiere.

Telling the story of Doralee, Violet and Judy - three workmates pushed to boiling point by their boss, the trio concoct a plan to kidnap and turn the tables on their supervisor.

Featuring original songs by Country legened and pop icon Dolly Parton, the plot takes inspiration from the cult film of the same name.

For more information about the tour and ticket news visit 9to5themusical.co.uk