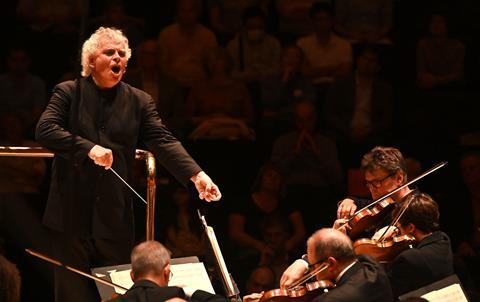 The London Symphony Orchestra has launched an online programme of full-length concerts.

While the London Symphony Orchestra’s (LSO) original schedule of Barbican concerts is no longer going ahead due to the venue’s temporary closure, past performances will be shared for free on the LSO YouTube channel.

The full-length concerts available to watch are led by LSO conductors such as music director Sir Simon Rattle and the orchestra’s principal guest conductors, Gianandrea Noseda and François-Xavier Roth.

The first video was streamed on YouTube on 29th March: Sibelius Symphony No 5, which was originally performed and broadcast from the Barbican Centre in 2018.

Audiences can tune in to watch nine more performances as they are streamed on LSO’s YouTube channel, with two performances a week scheduled. These have a shared viewing experience in mind, with the LSO stating that ’we hope that you will be able to sit down and watch at the same time as friends and family, wherever they are.’

The nine concerts scheduled in the ‘Always Playing’ programme are:

Along with this, the orchestra is promoting other methods of keeping entertained during the coronavirus lockdown. This includes a ‘read, watch and listen’ series where LSO staff detail which audio books, live recordings and other resources are keeping them positive. The team are also updating the LSO blog and recommending videos to watch. To see what they’re sharing, visit lso.co.uk/whats-on/2019-20-season/alwaysplaying.