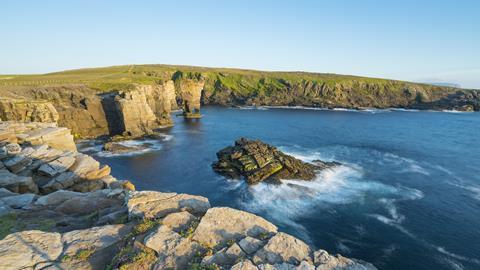 Coastal delights to have on your agenda

We take a whistle-stop tour of the UK to discover some of the nation’s best seaside destinations for groups.

Let’s begin our tour on the southwest coast of England; one of the most popular destinations for seaside visits in the UK due to its beautiful coastline and a warmer climate than many other areas of the country.

In Somerset, make a base at Beachside Holiday Park in Burnham-on-Sea, where caravans and beach bungalows await group guests. Burnham-on-Sea and Weston-Super-Mare are just a short drive away and at the latter, don’t miss the summer opening of the Museum of Memories on the Grand Pier.

Groups heading to Devon are welcome at Croyde Bay Holiday Resort on the north coast. A choice of hotel rooms, self-catering cottages and lodges with a range of food and beverage outlets make this a resort easily enjoyed. It has easy access to the beach, plus a large swimming pool and other leisure activities.

And in Cornwall, why not stop in Padstow or Newquay, both popular destinations from which to explore the many Cornish delights on offer. Retallack Resort and Spa, situated half way between these towns, offers a luxurious accommodation option for groups of many sizes; some lodges come with hot tubs.

Top tip: no group visit to Cornwall would be complete without a stop-off at the atmospheric ruins of Tintagel Castle, which is linked with the legend of King Arthur. Group discounts are available.

Happiness in the south

The south coast boasts Dorset, Hampshire and Sussex – you can read all about Sussex in our UK Focus feature, starting on page 34. In Dorset, meanwhile, head to coastal towns such as Swanage, Poole, Bournemouth, Weymouth and Lyme Regis, where walking groups can enjoy coastal hikes that go on for miles with outstanding ocean views.

Daish’s offers a great group accommodation offer at its hotels, such as the Bournemouth Sands Hotel, where coach travel, dinner, bed and breakfast, and optional excursions can be included in your stay.

Fancy the Isle of Wight? Warner Leisure Hotels has two properties here from which to explore all this island has to offer, including Osborne House in East Cowes and popular towns such as Shanklin and Ryde. Norton Grange Coastal Village offers a collection of chalets to stay in, while Bembridge is a hotel overlooking the Solent.

Best of the east

Resorts on the UK’s east and south-east coast range from the all singing, all dancing seaside resorts such as Southend-on-Sea and Clacton to the quieter pleasures of Frinton-on-Sea and Cromer.

In the south-east, groups might love Whitstable, Kent. One of the major attractions here are the local oysters, which the town has been famous for since Roman times. The annual highlight is the Oyster Festival (each July), when groups can expect oyster-eating competitions, parades and performances. At any time of year, however, it’s a great place to visit for fresh seafood and windswept coastal walks.

Heading further up the shoreline will find you at Potters Resort, a five star holiday village set in 65 acres on the glorious Norfolk coast. With a range of breaks from relaxing midweeks to jam packed weekends through to superb one night breaks, Potters offers group benefits including free places and incentives for GTOs on many breaks.

No seaside trip to Norfolk would be complete without a visit to Great Yarmouth, known for its long sandy beach and traditional English seaside offering. Highlights include the Time and Tide Museum, The Nelson Museum, the SEA LIFE aquarium; and rides at the Pleasure Beach, which is free to enter.

And in Yorkshire, visit Whitby, with its fantastic fish and chip offering and ties to Bram Stoker’s Dracula, and Runswick Bay, popular with holidaymakers. Don’t miss a visit to Staithes, a fishing village said to be one of those most photographed beaches on the east coast, due to its classic coastal beauty. 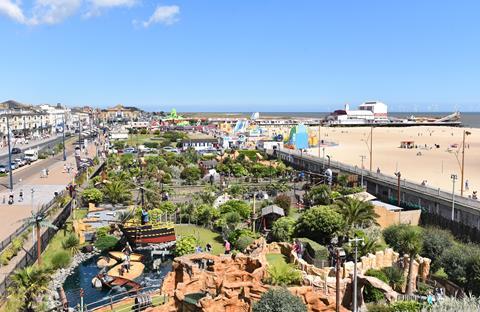 Turn left and then right and you might find your group on England’s west coast, at resorts including Morecambe and Blackpool in Lancashire, or Whitehaven in Cumbria. In Morecambe, enjoy a photo with the iconic Eric Morecambe statue, which looks out across the promenade, and The Tern Project, a series of public art installations inspired by the birdlife of Morecambe Bay.

Blackpool is of course recognisable for the Blackpool Tower and the famous pier, but there are other delights in store at this seaside resort including the Blackpool Winter Gardens (a Grade II-listed property steeped in history) and guided tours that can be organised through VisitBlackpool. Lay your head at the Best Western Carlton Hotel which enjoys a fantastic seafront location and welcomes groups.

Groups can also enjoy a coastal break at Southport in Merseyside, where a yearly programme of events includes the Southport Flower Show, Southport Air Show, and the British Musical Firework Championships. Discounts are available for pre-booked groups to all these events.

The wonders of the north

Off the coast of Scotland is Orkney, where 70 islands are waiting to be explored. Easy to reach by plane (an hour direct from Edinburgh) or by sea (there are between four and 12 ferry sailings a day from places including John o’ Groats), this archipelago offers plenty by way of tourism. Don’t miss The Kitchener Memorial on the cliffs of Marwick Head, built in memory of Lord Kitchener who was lost in June 1916, when the cruiser H.M.S. Hampshire sank nearby.

Those groups sticking to mainland Scotland might like to consider Kippford Beach in Dumfries and Galloway; a beautiful seaside retreat in the friendly town of Kippford, near to Castle Douglas, on the Solway Coast. It is certainly unique as the beach is made up almost entirely of cockle shells. The coastal walk from Rockcliffe to Kippford is a great addition to any trip.

North Berwick Beach in East Lothian has long been a favourite seaside escape for families, located only 25 miles from Edinburgh city centre. With plenty of shops, cafés and the Scottish Seabird Centre close by, there’s plenty for groups with varying interests to enjoy.

And don’t forget Aberdeen, where a 165-mile-long strip of coastline includes golden sandy beaches, hidden caves and rugged cliffs. Look out for the wildlife, too – puffins, seals and dolphins are just a few creatures that inhabit the region. Aberdeen Tours caters for up to 49 people for private day tours from the city centre.