The number of groups visiting Up at The O2 at Greenwich’s Millennium Dome nearly doubled in 2019 with more than 6,000 visitors. 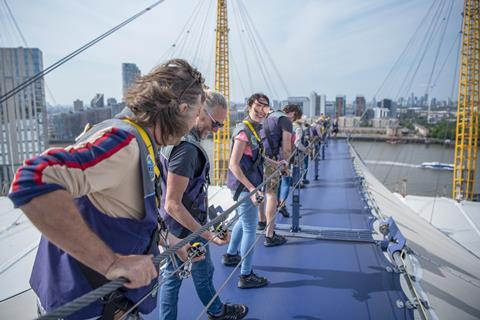 The attraction has seen a rise in the number of groups visiting.

The attraction recorded around 4,000 group visits in 2018 and claims the spike in interest, which has been seen across the board, could be down to the fact that it featured heavily during an episode of EastEnders - watched by more than four million people.

The episode showed Jean Slater, played by Gillian Wright, climbing to the top of the O2 to raise awareness for the character’s diagnosis of cancer.

Other contributing factors to the rise in numbers included yoga classes, a silent disco and choirs for Christmas which all pulled in more visitors, totalling 123,176 climbers for the whole year.

Dan Hurst, head of attractions at The O2 Arena, said: “Up at The O2 smashed every record in 2019 and has been a great display of collaboration, innovation, and striving to raise the bar.

“More than 123,000 admissions in a single year is an incredible achievement and I am so proud to see all our hard work pay off.” 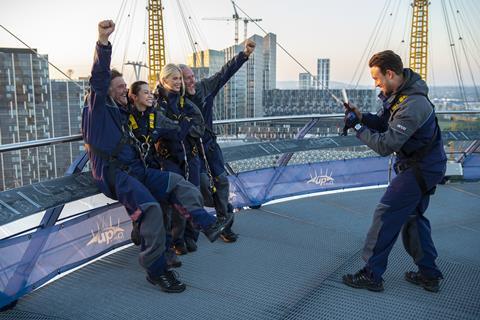 There’s time for a photo before taking in the beautiful views.

Dan continued: “We would like to say a big thank you to everyone who has climbed our wonderful attraction and been part of our record breaking year.”

TV presenter and Group Leisure & Travel columnist, Julie Peasgood, took part in a climb recently. You can find out how she got on here.

Since opening in 2012, Up at The O2 has seen more than 750,000 visitors make the climb to the top of the walkways to take in London’s skyline.

The climb takes around an hour to complete and its walkway is suspended two metres above the iconic dome.

You can watch below:

There are different time slots throughout the day to choose from, including a Sunset Climb and a Twilight Climb. Group rates for 2020 are now available for up to 30 people.