Tickets now available for City of Angels in the West End 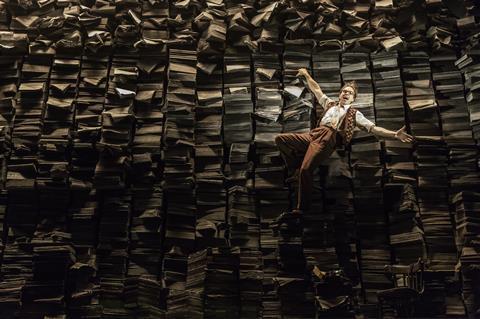 City of Angels follows the story of a crime writer trying to adapt his book into a screenplay.

City of Angels first opened at the Donmar Warehouse, London in 2014 and went on to win an Olivier Award. Now, the musical will play at the West End’s Garrick Theatre from March next year.

The musical, described by The Telegraph as an “ingenious, stupendous revival”, is a retelling of the original stage show that first opened on Broadway in the late 1980s before touring the US in the 1990s. The story takes place in 1940’s Hollywood, blending two narratives: one, a musical comedy, and the other, a detective drama.

Many of the cast perform two roles, one in each of these parallel stories. Hadley Fraser will appear as Stine (Les Miserables, The Pirate Queen), an author writing a detective screenplay titled City of Angels; Rosalie Craig (Sweeney Todd, As You Like It) stars as Gabby/Bobbi, wife of Stine; and, making her West End debut, Vanessa Williams takes on the role of Carla/Alaura - wife and femme fatale.

Williams, an American singer, actress and fashion designer, is best known for her television work on Ugly Betty and Desperate Housewives as well as film appearances and a music career. She also wrote a New York Times best-selling autobiography titled You Have No Idea.

“In the five years since I directed the show, I’ve experienced making movies first-hand, and I will return to this Hollywood story with a little more insight!”

The creative team behind the 2014 production will be reunited for this run, which officially opens at the Garrick Theatre on Tuesday 5th March 2020, closing on Saturday 5th September 2020.

Evening performances will be at 7.30pm on Monday to Saturday, with 2.30pm matinees on Wednesday and Sunday. Tickets prices start from £20 and are now available to book at www.nimaxtheatres.com/shows/city-of-angels/.

Bookings are available for groups of 8+ and can be arranged over the phone (0330 333 4817) or via email groups@nimaxtheatres.com