The tour schedule and full casting details have been confirmed for the upcoming production of George Orwell’s satirical novel Animal Farm which launches at Birmingham Repertory Theatre in January. 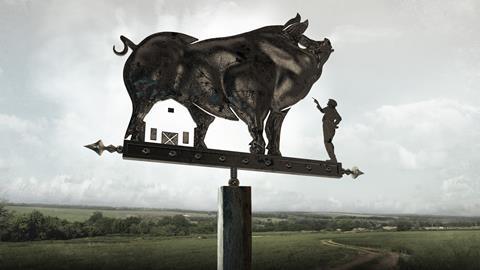 UK tour dates have been announced for a new stage adaptation of George Orwell’s satirical novel.

The show, which is being produced by the Children’s Theatre Partnership (CTP) in association with Birmingham Repertory Theatre, has been billed as a “dynamic, daring and contemporary take on a timeless story”.

The production has been adapted and directed by the award-winning Robert Icke whose previous adaptations includes another of Orwell’s classics, 1984, which had successful runs in both the West End and on Broadway.

It will combine the designs of four-time Olivier Award-winning Bunny Christie (A Midsummer Night’s Dream and The Curious Incident of the Dog in the Night-Time) and puppetry by Toby Olié (War Horse and Running Wild).

Icke has previously worked on another of Orwell’s classics, 1984, which he co-adapted and directed alongside Duncan Macmillan, winning him his first Olivier Award nomination for Best New Play and enjoying hit runs in both the West End and on Broadway.

After Animal Farm’s run at Birmingham, the production will embark on a UK tour that includes Cambridge, Norwich, Plymouth and Nottingham, before concluding on 28th May at Churchill Theatre in Bromley, South London.

The 2022 tour dates and venues are as follows:

About George Orwell and Animal Farm

George Orwell (1903-1950) was born Eric Arthur Blair and became an English novelist, essayist and critic, best known for his novels Animal Farm and 1984. Orwell’s work notoriously addressed political movements of his time, including imperialism, fascism and communism. Animal Farm was first published in 1945 and tells the story of a revolution and its aftermath.

CTP was established in 2010 to produce and tour bold, ambitious and imaginative theatre for young people, families and schools. It aims to “excite and engage new and diverse audiences, often introducing them to the theatre for the first time,” bringing communities to their local theatres and inspiring a life-long love of theatre.

Groups are advised to contact each venue directly for tickets. For more information about the production see www.animalfarmonstage.co.uk.