The first batch of tickets are now on sale for Andrew Lloyd Webber’s School of Rock the Musical which takes to the road from February 2021. 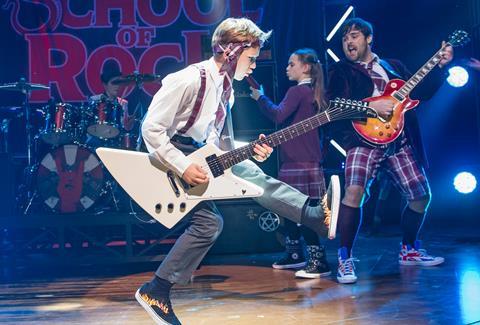 The London production of School of Rock the Musical.

Opening at the Birmingham Alexandra Theatre on 13th February, the musical will embark on an extensive tour throughout next year, closing at the New Oxford Theatre on 1st January 2022.

Just some of the towns and cities featured on the run include Milton Keynes, Leeds, Newcastle, Bournemouth, Plymouth, Southampton, Norwich and Liverpool.

Casting will be announced soon.

Based on the film of the same name, School of Rock follows the story of Dewey Finn, a failed rock star who decides to earn a bit of extra money by posing as a substitute teacher at a private school.

While there, he convinces his class to form a band (in the production, young actors perform live music every night for audiences).

While teaching the class ‘what it means to truly rock’, Dewey falls for the school’s headmistress, helping her rediscover her fun side.

Andrew Lloyd Webber wrote 14 new songs for the show when it began playing in London, to be mixed in with originals from the film.

Since it opened at the New London Theatre (now Gillian Lynne Theatre) in November 2016, it has won the Olivier Award for Outstanding Achievement in Music, ending its season on 1st March this year; and making way for Andrew Lloyd Webber’s upcoming Cinderella musical at the same venue.

The show features lyrics by Glenn Slater (Sister Act) and a book by Julian Fellowes.

Possibly best known for musicals such as Cats, Joseph and the Amazing Technicolor Dreamcoat, Jesus Christ Superstar and The Phantom of the Opera, Lloyd Webber has won many awards for his work in musical theatre, including seven Oliviers and a Golden Globe.

The Andrew Lloyd Webber Foundation has become one of Britain’s leading charities which supports arts and music in schools, reflecting his passion for the subject.

You can find out more information at uktour.schoolofrockthemusical.com.