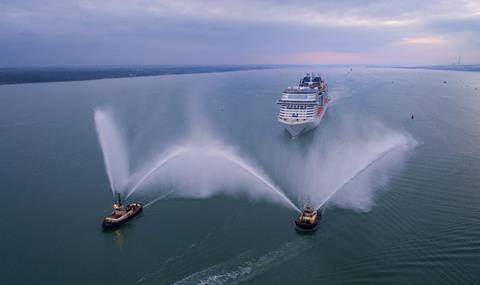 MSC Bellissima, part of MSC Cruises, arrives in Southampton for its launch.

Italian screen legend Hollywood Sophia Loren, world-famous tenor Andrea Bocelli and TV presenter Holly Willoughby were part of a star-studded line-up at the christening of MSC Bellissima on Saturday, 2nd March - the biggest ever ship to be named in the UK.

The ceremony - which had to be altered at the last minute when Storm Freya hit Southampton - also saw the announcement of a new partnership with Michelin star chef Raymond Blanc who will create a signature dish for the world’s largest privately owned cruise line.

MSC’s £750 million new flagship has a capacity for 5,686 passengers and is the biggest in the 16-strong MSC fleet and the sixth biggest ship in the world, with a deck surface area equivalent to 63 football pitches.

The second of the line’s Meraviglia-class ships, MSC Bellissima was built at the Saint Nazaire shipyard in France and sailed to Southampton y for the ceremony that took place in front of 2,500 guests. The event, hosted by Holly Willoughby, was held in a marquee on the quayside next to the ship, but as strong winds caused by Storm Freya buffeted the pavilion it was decided that everyone should return to the ship.

It was the 14th time Sophia Loren had named a ship for MSC, and become the official ‘godmother’, and the rest of the ceremony was shown on LED screens around the vessel, culminating with the traditional breaking of a bottle of Champagne on the bow. Italian singer Andrea Bocelli and his son Matteo sang earlier in the evening and there was also a dazzling performance by members of Cirque du Soleil. 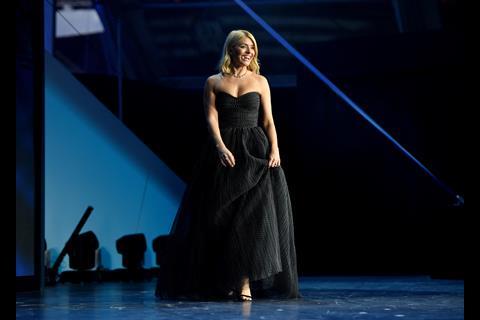 Holly Willoughby was part of a star-studded line-up at the christening of MSC Bellissima on 2nd March 2019. 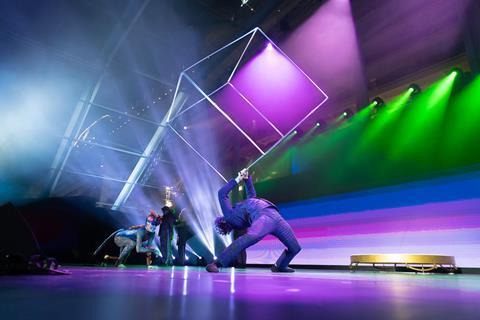 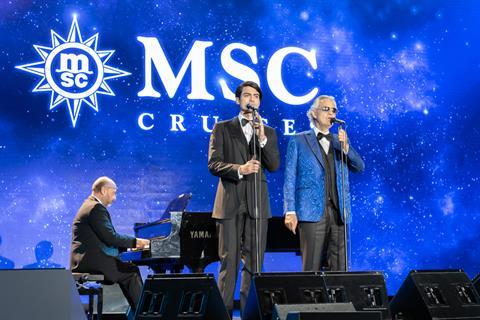 Matteo and Andrea Bocelli performed at the christening of MSC Bellissima. 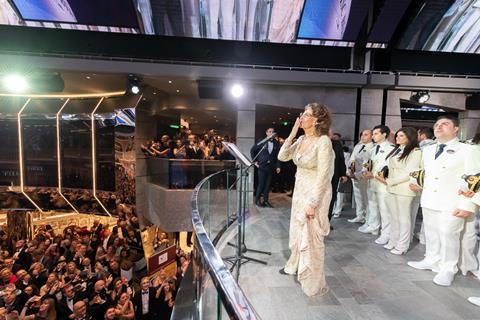 The latest vessel in the fast-growing line has 12 dining venues and more than 20 bars and lounges, including the new French speciality restaurant L’Atlelier Bistrot. MSC Bellissima also features acclaimed pastry chef Jean-Philippe Maury’s Chocolate & Cafe, dedicated entirely to chocolate creations and desserts and a delight for any groups with a sweet tooth.

Commenting on his new partnership with the line, two Michelin star chef Raymond Blanc said: “I am truly looking forward to collaborating with MSC Cruises on some exciting projects, including the development of one of my signature dishes for the Elegant Dinner menu. I believe we have a shared passion for the guest experience, and together we will create some truly memorable moments for diners on board.”

The high-tech ship also boasts the longest LED Sky Screen at sea, which stretches more than 250ft feet above the central promenade dining and shopping area, and is used to screen daily shows on different themes, such as ‘Capitals of Music’ and ‘Time Machine’. All new for Bellissima is Zoe, an artificial intelligence device fitted in every cabin which is a voice-activated virtual cruise assistant that can provide information on all aspects of the ship and its dining facilities.

On board entertainment includes two new and exclusive Cirque du Soleil shows especially choreographed for MSC and performed in the Carousel Lounge which has a special stage for the breath-taking performances.

MSC Bellissima will spend her inaugural season in the Mediterranean offering seven-night cruises to some of the region’s most popular ports before moving to the Emirates for winter 2019/2020. Following that she will be deployed in Asia in 2020.

For information about the cruise line and its holidays visit www.msccruises.co.uk