The King Richard III Visitor Centre in the city of Leicester has launched a new group talk, Feast and Festivities, which showcases food in the medieval period and the importance of it in celebrations. 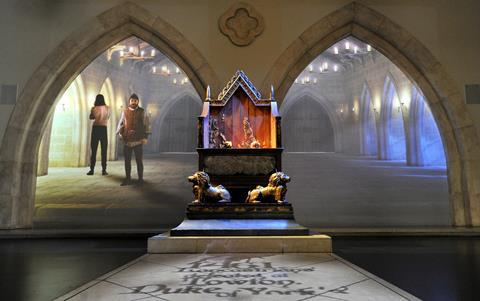 The Throne Room at the King Richard III Visitor Centre in Leicester.

Visitors will be invited to explore more about what people ate during the reign of King Richard III, as well as the food that the king himself would have eaten. The talk will also trace links to foods which still have medieval influences today and the variation in diets between the rich and the poor of society in medieval times.

Feast and Festivities joins an existing programme of group talks which include:

About the Visitor Centre

Housed in a former Victorian grammar school building, the Visitor Centre stands on the site of the medieval friary of the Grey Friars, where King Richard III was buried over 500 years ago after his defeat by Henry Tudor at the Battle of Bosworth.

The exhibition – Dynasty, Death and Discovery – gives visitors the chance to learn more about the king’s life and reveals one of the greatest archaeological detective stories ever told, including the first ever genome sequencing of ancient DNA. Visitors can also see the very place where King Richard III was hastily buried, now transformed and preserved under a glass floor.

The centre is situated next to Leicester Cathedral where King Richard III’s remains were re-interred in March 2015.