Former Dancing on Ice winner and I’m a Celebrity… Get Me Out of Here! contestant Jake Quickenden is set to play Willard in the upcoming UK tour of Footloose The Musical. 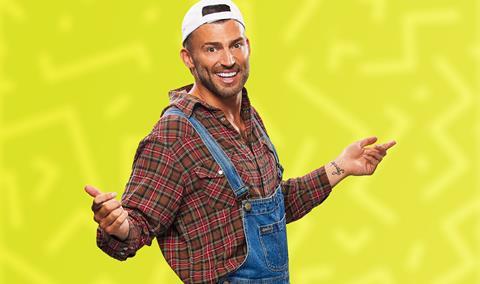 Jake Quickenden will play the role Willard in the upcoming tour of Footloose.

The musical will return for a third UK tour, beginning at the Theatre Royal Plymouth on 14th February 2022, with Jake Quickenden playing the part of Willard and joining the previously announced Darren Day as Reverend Moore.

Quickenden first featured on television screens in The X Factor in 2012 and again in 2014 where he competed in the live shows followed by appearances on Chart Show TV, ITV’s Kelly’s Heroes, and as a regular panellist on Big Brother’s Bit On The Side.

Since then, he has gone on to win the 2018 season of Dancing on Ice and has most recently been seen in the Channel 4 soap opera Hollyoaks.

When asked about appearing in the tour of Footloose The Musical, he said: “I can’t wait to get out on tour. After such a strange and difficult time we will finally be able to join our friends and family in the theatre for a truly feel-good night out.

Quickenden’s co-star Darren Day has starred in several theatre productions including We Will Rock You, Joseph and the Amazing Technicolor Dreamcoat and Grease among others.

Day added: “I was a teenager in the 80s, which is such an impressionable age for movies and music.

“This is one of the most iconic films and soundtracks from my teenage years. I can remember hearing Footloose on the radio for the first time and thinking… what a tune!”

The show follows the story of city boy Ren who moves to a rural town in America only to find his passions for dancing and rock music are banned. He then takes matters into his own hands to get the whole town on its feet.

Group rates are venue-specific with more information available at www.footloose-musical.com.