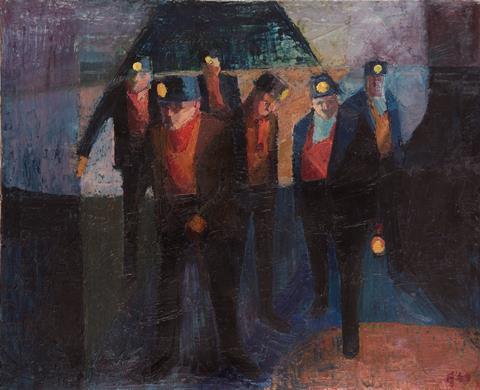 ‘Bevin Boys’ were young British men conscripted to work in the coal mines of the UK between December 1943 and March 1948, and the exhibition commemorates 75 years since the scheme began.

In 1943, Britain had been at war for four years. The mining industry had lost 36,000 men to the armed forces or other war time industries, and coal supplies began to significantly decrease.

A compulsory conscription scheme was set up by Minister for Labour Ernest Bevin, whereby every month, for 20 months, Bevin’s secretary drew numbers from a hat. If the number drawn matched the last digit of a man’s National Service number, he was sent into the mines.

By the end of the scheme, 48,000 men from all walks of life had been made to work in the dark and dangerous world of coal mining.

In response to their experiences, some Bevin Boys created art by drawing and painting the underground world of the mining community.

It is artworks by former Bevin Boys Ted Holloway, Tom McGuinness, David McClure and John Tipton that feature in the exhibition.

Groups visiting will get to learn about each of these men and his background, plus see some of the work they created during the time working in the mines.

Etchings by Tom McGuinness, for example, feature trademark hunched, distorted figures, while John Tipton’s work show sketches and paintings of the countryside around where he was made to mine, and landmarks such as Durham Cathedral.

About the Mining Art Gallery

In October 2017 the Auckland Project launched the UK’s first gallery dedicated to mining art. The gallery reveals how miners responded to their experiences creatively, from the conditions they endured underground to the pit communities they returned home to.

In addition to a programme of temporary exhibitions, the gallery holds a permanent collection of over 400 works of mining art, including paintings, prints and drawings, called the Gemini Collection.

Prebooked groups will get one free ticket for every ten purchased.