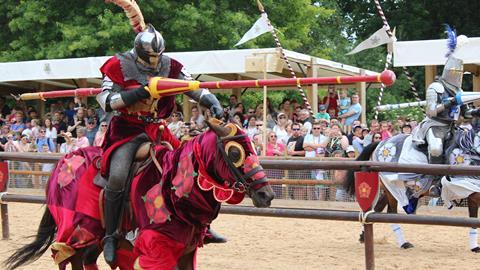 Are you and your group supporters of the Red Rose or the White Rose? Or is it something you’ve never thought to consider? Pay a visit to Warwick Castle this summer and I assure you the question will become wholly important – because during Wars of the Roses Live, every pledge of allegiance counts.

Or at least, that’s how I felt while watching this live jousting and history show. Running on selected dates until September, Wars of the Roses Live is set in 1455, when the House of Lancaster held the English throne but was challenged by the House of York.

The 40 minute stunt show portrays the 30 year battle that ensued, acted out by a group of actors, horse riders and stunt artists who bring the historic tale to life. This is the second year it’s running at Warwick Castle, with plans in the pipeline to run it again in 2019.

The whole show is dramatic from start to finish – I’d suggest that if you’re part of a group with children, take them along. It’s great for adults too; I was completely into it, chanting “Red Rose! Red Rose!” along with the other hundreds of people who had joined House Lancaster (you get to choose a side when you take your places in the stands).

However, the children in the audience appeared truly convinced that these were real knights in front of them, and their cheers and cries of wonder were proof that this show is probably more child-friendly than aimed at adults.

Top tip, get to River Island early. This is part of the Warwick Castle grounds where a massive jousting arena has been set up for War of the Roses Live, and the show is incredibly popular, so be sure to take your place as soon as you can.

Highlights throughout the show include the jousting battles themselves, which thrilled the audience with the splintering of wooden lances and shields on impact, the thundering hooves of the horses dressed for war, and the battle cries from the knights fighting in the arena. The use of fire, smoke, explosions of streamers and appropriate music all add to the spectacle.

And the actors and riders themselves are brilliant, with one man daring to hang off his horse, terrifyingly close to the ground; and another three building a human pyramid across two horses, to ride around the arena in a terrifying feat. I’ve never seen anything like this show before, and it really is a great addition to everything else Warwick Castle has to offer on a day out.

Group rates at Warwick Castle are available to parties of seven or more people. War of the Roses Live is included in your entry fee.

New this year is the chance to pair your Warwick Castle visit with an overnight stay in the Wars of the Roses themed Knight’s Lodge village. With a mezzanine style floor and room to sleep up to seven people, these lodges are a great choice for groups wanting to extend their castle visit.

Plus, opening this August will be another live show, called the Dragon Slayer. The show, running for eight performances from 3rd August, will tell the epic story of Guy of Warwick as he conquers beasts to win the heart of Princess Felice, the Earl of Warwick’s daughter.

It will combine fire jousts, equestrian acrobatics, thrilling stunts and captivating performances. Discounts are available for groups of 15 or more and various packages are available to book.

You can read more here.