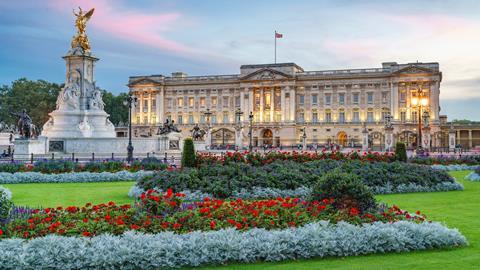 We went along to the official preview day for the summer opening of Buckingham Palace’s State Rooms, including all the usual grandeur, plus a special exhibition to mark Her Majesty’s Platinum Jubilee which shows off some of her finest jewellery.

Audio guides are handed out as part of your self-guided tour around the royal residence to signpost specific highlights but for me, all you need to truly appreciate the experience are your eyes. The helpful guides were a handy piece of kit throughout, but I couldn’t help but drift off with my imagination at times, wondering how many of the world’s most famous and powerful people have stood exactly where my feet were planted.

The annual summer opening of the State Rooms, running until 2nd October 2022, is always a popular sell from the Royal Collection Trust but this year is particularly special. Not only is it the first time it has opened since 2019, but the Platinum Jubilee: The Queen’s Accession exhibition celebrates the start of Her Majesty’s reign and centres around 24 official portraits of The Queen taken by Dorothy Wilding.

Before you find your way into the exhibition, visitors arrive at the official entrance where guests of importance are usually greeted and taken through. Once up the Grand Staircase, it’s into the Green Drawing Room although your focus inevitably shifts towards the two empty thrones next door which stare at you through the doorway.

I was lucky enough to preview the tour before it opened to the public and stood in awe in front of these rightly coloured chairs for some time. Known as the Chairs of Estate, they were produced at the time of Her Majesty’s coronation ceremony way back in 1953. 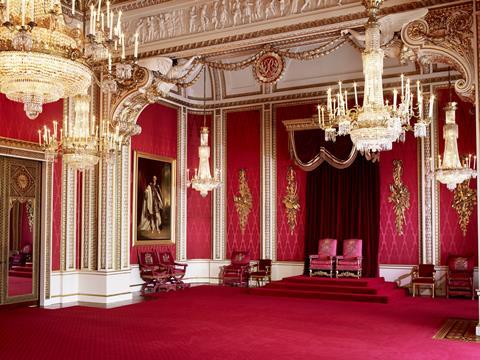 The Throne Room is the setting for hosting occasions for international political figures and people from all walks of life.

One chair has the initials ‘EIIR’, the other inscribed with a ‘P’ for the late Prince Philip, Duke of Edinburgh. A dramatic arch canopy sits over the thrones making them even more captivating, almost as if to demand the attention of the room. It was also here in this room that the Duke and Duchess of Cambridge had their wedding photographs taken.

The Picture Gallery which follows has some of the greatest paintings in the Royal Collection. The 47 metre long room has countless works which regularly change when pictures go out on loan to various art exhibitions around the world. And it is this that leads to the true centrepiece of the year’s opening – Platinum Jubilee: The Queen’s Accession.

For the first time ever, Wilding’s original hand-finished prints are shown alongside items of jewellery worn by Her Majesty for the portrait sittings, some of which have never been seen by the public.

In May 1937 she became the first official female royal photographer when appointed to take the portraits at the coronation of King George VI and Queen Elizabeth. The 11-year-old Princess Elizabeth featured in the photographs along with her sister Princess Margaret, and the display includes the embellished cream dress, purple robe and gold coronet worn by the young Princess for her parents’ coronation – my personal favourite in the collection. 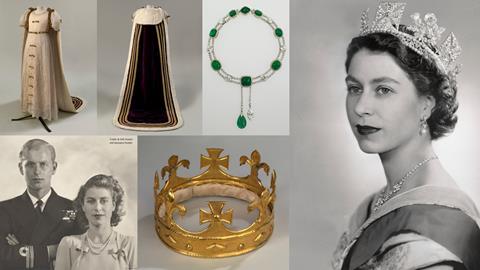 Portraits taken from 1952 within the exhibition show The Queen wearing a coronet, which was felt to be more appropriate for official use on coins and postage stamps. A crown could not be worn as the coronation was not to take place until 2nd June 1953, and so the Diamond Diadem was selected. Sparkling in its glass display cabinet, it was originally intended for George IV’s coronation in 1821 and set with 1,333 diamonds.

Other highlights not to be missed across the display include a sapphire and diamond Cartier bracelet, which was given to The Queen by her father King George VI as an 18th birthday present in 1944, and the South Africa necklace, given to Elizabeth on her 21st birthday.

Afterwards, visitors can then enjoy the Music Room, the Ballroom –which today hosts investitures and state banquets – and more magnificent State Rooms. If you visit, I wonder if you will spot the secret doorway behind one of the mirrors in the White Drawing Room which leads to Her Majesty’s private apartments. 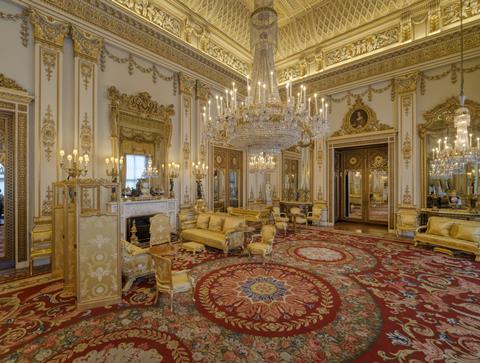 The White Drawing Room is one of the more intimate state rooms at Buckingham Palace.

Outside, the garden offers a fantastic picture opportunity and the chance to enjoy a quintessentially British cream tea while overlooking Her Majesty’s lawn. If you wanted to, groups can also combine a State Rooms visit with a Garden Highlights Tour to see the Royal Tennis Court and Rose Garden.

It’s hard to put into words how special the experience is. Nothing compares to looking around the official home of the British monarchy and trying to take in the amount of history on display. My advice for groups? Take your time. Once inside, you can take each room at your own pace. I for one will most definitely be going back next year.

Group visits to Buckingham Palace must be pre-booked. GTOs can reserve and book selected tickets online or by calling the Ticket Sales and Information Office on 0303 123 7321, with discounted rates for 15 or more people.

For more information about group visits to Buckingham Palace, or any of the sites looked after by the Royal Collection Trust, go to www.rct.uk/travel-trade-and-groups.