The cast of Wicked have resumed performances at the West End’s Apollo Victoria Theatre with an extended group booking period until November 2022. 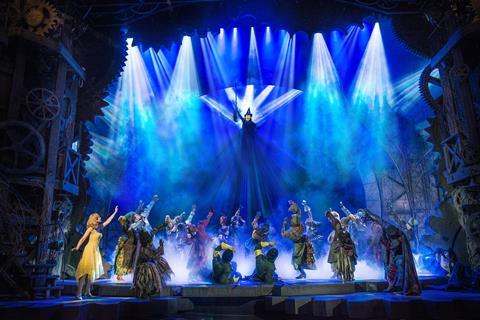 Wicked has resumed performances at the Apollo Victoria Theatre in London.

Tickets exclusively for groups are now on sale for all performances up until 27th November 2022 – an extended booking period of six months – with performances taking place Tuesday to Saturday evenings and matinées on Wednesday, Saturday and Sunday.

Joining the returning cast, which tells the story of the witches of Oz, is Sophie Evans, who played Glinda from 2017-2019 and stars opposite Laura Pick who continues her performance as Elphaba. Sophie said she was “overjoyed” to have the opportunity of playing the role of Glinda again.

Wicked UK executive producer Michael McCabe said the team was pleased to welcome back so many of the cast whose time with the show was curtailed by the shutdown of the theatre industry in March 2020.

He said: “We then look forward to welcoming many new cast members at the beginning of February next year as part of our continuing journey towards widening access to the show, platforming diverse talent and establishing a more inclusive and respectful workplace.”

The production marks its 15th anniversary at the Apollo Victoria Theatre which is owned and operated by the Ambassador Theatre Group.

Wicked has music and lyrics by award-winning composer Stephen Schwartz and is written by Winnie Holzman, creator of the American television series My So-Called Life. It is based on Gregory Maguire’s multi-million-copy bestseller, Wicked: The Life and Times of the Wicked Witch of the West.

The show has been seen by over ten million people in London alone and has played almost 6,000 performances. It has won over 100 international awards including three Tony Awards, two Olivier Awards and a Grammy Award.

For group bookings of ten or more visit www.WickedGroups.co.uk.