West End return for The Girl from the North Country

The Girl from the North Country will play at the Gielgud Theatre in the West End for an eight week season, running from 10th December until 1st February. 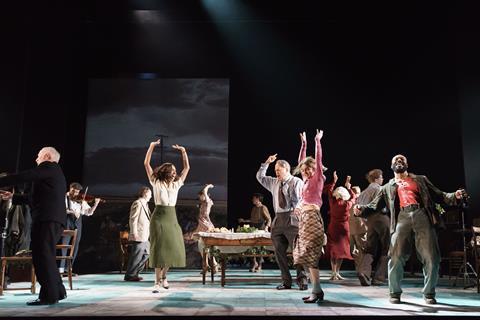 The original cast performing at The Old Vic in 2017.

The production opened at London’s, The Old Vic in July 2017 before transferring to the Noël Coward Theatre that December.

It has gone on to play in New York and returns to the West End at the end of the year following a short spell in Toronto, Canada.

The show is written and directed by Conor McPherson and features music and lyrics by Bob Dylan, with the show also named after one of the musician’s hits.

Groups of ten or more qualify for a discounted rate.

‘It’s 1934. A time-weathered guesthouse sits in the heartland of America. Only a song can shake off the dust for one group of wayward souls—and old dreams may hold the promise of new beginnings. As they pass in and out of each other’s lives, their stories awaken with passion, fury and extraordinary beauty.’

“Bob Dylan’s songs have never sounded so heartbreakingly personal and universal. As close as mortals come to heaven on Earth.”

‘Reimagining the music of Bob Dylan as roof-raising ensemble pieces and soul-stirring solos, celebrated playwright Conor McPherson (The Weir, The Seafarer) writes and directs this heartbreaking and universal story about family and love.’

The show will also open on Broadway on 5th March 2020 at The Belasco Theatre.

For more information and tickets to one of the performances on the limited run, visit www.girlfromthenorthcountry.london/index.html