Producers of the West End production of Lin-Manuel Miranda’s Hamilton have revealed the full cast for the musical which resumes on 19th August at the Victoria Palace Theatre. 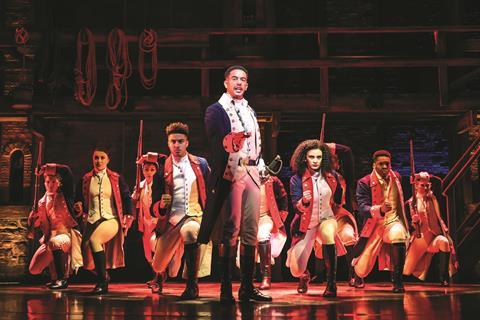 The rest of the main cast is made up of Emile Ruddock as Hercules Mulligan/James Madison, Khalid Daley as John Laurens/Phillip Hamilton, Emilie Louise Israel as Peggy Schuyler/Maria Reynolds and Harry Hepple as King George. At certain performances the role of Alexander Hamilton will be played by Nuno Queimado.

Hamilton is the story of America’s Founding Father Alexander Hamilton, an immigrant from the West Indies who became George Washington’s right-hand man during the Revolutionary War and helped shape the foundations of the country.

The score blends hip-hop, jazz, blues, rap, R&B and Broadway – the story of America then, as told by America now.

About some of the cast

Karl Queensborough’s previous theatre credits include White Teeth at the Kiln Theatre and Sylvia and The Girl From the North Country at The Old Vic, while Simon-Anthony Rhoden appeared in Kinky Boots at London’s Adelphi Theatre.

Ava Brennan’s theatre credits include Tina – The Tina Turner Musical at the Aldwych plus the West End and UK tour productions of The Lion King and Sharon Rose appeared in Motown The Musical at the Shaftesbury Theatre.

You can watch what to expect below:

The Olivier, Tony and Grammy award-winning production opened at the newly re-built and restored Victoria Palace Theatre in London in December 2017 and continued to play there until the start of lockdown in March last year. The show is taking bookings until 13th February 2022.

Group bookings are available for those of ten or more people. More information is available at hamiltonmusical.com.