Described as ‘Mr Exmouth’, tributes have been paid to Ian Stuart of Stuart Line Cruises in Devon who has died at the age of 56. 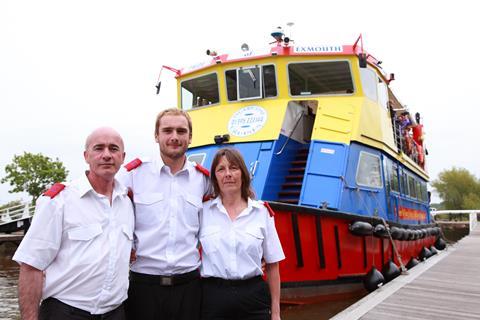 Ian, his son Jake and wife Philippa, pictured during one of their Exeter Canal Cruises – Ian’s favourite cruise!

Ian was known as a great champion of coach tourism, full of energy and ideas.

He had been diagnosed with terminal cancer a year ago, and leaves son Jake and wife Philippa who said: “Ian worked so hard for everything he had and Stuart Line Cruises will continue business as usual, as that is what he would want.

“We have adored welcoming coaches back to our attraction since 4th July this year and will continue to do so, come hell or high water.”

“Ian was charismatic, good-humoured and incredibly generous by nature – character traits which carried him throughout the impressive progression of his career.”

Stuart Line Cruises was founded in 1968 by Ian’s father, Tony. He operated a small wooden 52-seater boat called Seacrest from Exmouth seafront. Ian took over his father’s business in 1992 and in 1994, Ian and Philippa purchased Tudor Rose which enabled them to start working throughout the year. The Pride of Exmouth arrived in 2003, licensed to carry up to 250 passengers. As the business evolved, Ian started to recognise the group travel market within the tourism industry and its potential impact on his year-round business, voicing its importance across Devon.

“Ian filled the last year of his life with a mixture of work, leisure and quality time with his loving family, whilst receiving palliative treatment and fought his illness with great stoicism. His optimism was unrelenting and he bore his final illness with courage and dignity, which is testament to the quality of this remarkable man.”

Ian passed away on 3rd October at the age of 56, following a week away with his wife, Philippa, during which he was thrilled to see the Pride of Exmouth sail past with Jake at the helm, during his Jurassic Coast Cruise.