Tickets for the upcoming West End production of Mary Poppins have now gone on sale. 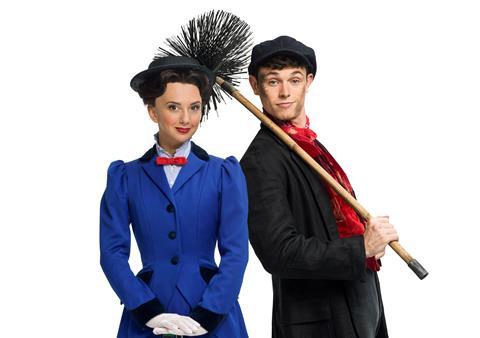 Zizi Strallen as Mary Poppins and Charlie Stemp as Bert.

Mary Poppins will begin previews on 23rd October 2019, with opening night on 13th November, and is currently booking until 29th March 2020.

The musical, based on the stories of P. L. Travers and the original film, returns to its original West End home at the Prince Edward Theatre after fifteen years.

Mary Poppins: What to expect from the show

The musical follows the magical story of nanny, Mary Poppins, arriving on Cherry Tree Lane and changing the lives of the Banks family.

Starring Zizi Strallen in the title role and Charlie Stemp as Bert, this production has been praised by critics and audiences alike and seen by 12 million people worldwide. Further casting will be announced at a later date.

Zizi Strallen was last on stage playing Fran in Strictly Ballroom The Musical at the Piccadilly Theatre. Her previous theatre credits include Follies at the National Theatre, Mary Poppins on tour in the UK, Ireland and in Dubai, Matthew Bourne’s The Car Man and Cinderella at Sadler’s Wells, among others.

Charlie Stemp has recently been seen in Snow White at the London Palladium and later this month he opens in a UK tour of Rough Crossing. His previous theatre credits include Barnaby Tucker in the Broadway production of Hello, Dolly!, the title role in the 2017 Palladium pantomime Dick Whittington and his critically acclaimed performance as Arthur Kipps in Half a Sixpence at the Nöel Coward Theatre.

The stage production of Mary Poppins originally opened in the West End in December 2004, running for over 1,250 performances. During this time, the production won various awards.

This new production of the show will be seen for the first time in London following runs in Australia, North America, the UK and Ireland, New Zealand, Holland, Mexico, Austria, Switzerland, Dubai, Japan and Germany, where the production recently entered its second hit year in Hamburg.