The outfits worn by Her Majesty The Queen for her appearances during the Platinum Jubilee weekend make up a special display at the Palace of Holyroodhouse in Edinburgh. 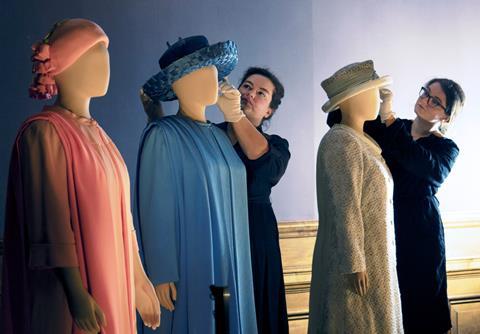 Royal Collection Trust curators put the finishing touches to the display of Her Majesty The Queen’s Silver, Golden and Diamond Jubilee ensembles.

Visitors will see a display of outfits worn by Her Majesty on occasions to celebrate the Silver, Golden, Diamond and Platinum Jubilees, as well as a selection of gifts presented during her official engagements in Scotland throughout her 70-year reign.

The Platinum Jubilee display will be included in a visit to the Palace of Holyroodhouse until Sunday 25th September. Alongside the outfits worn by The Queen at the various celebrations will be items from her first official visit to Edinburgh, just 20 days after the Coronation at Westminster Abbey on 2nd June, 1953 including a set of goblets presented by the High Constables of the Palace of Holyroodhouse.

Dressed to impress; the story behind the outfits

Each summer, The Queen spends a week visiting various regions in Scotland, in a celebration of Scottish culture, achievement and community known as Royal Week or Holyrood Week. 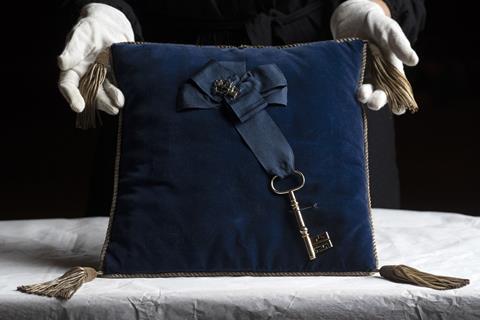 The display will feature a number of items including the ceremonial key presented to Her Majesty each year during the Ceremony of the Keys.

The week always begins with a ceremony on the forecourt of the Palace of Holyroodhouse known as the Ceremony of the Keys, in which Her Majesty is welcomed into the city of Edinburgh and offered the keys to the city and to the Palace.

This event most recently took place on 27th June and visitors will be able to see the silver-gilt Ceremonial Key to the Palace of Holyroodhouse that was offered to Her Majesty as part of the display.

The Queen has undertaken several thousand engagements in Scotland and in support of Scottish causes since the beginning of her reign. The display includes a range of gifts presented to Her Majesty during these engagements, including a silver model of a miner’s Davy lamp, presented in Fife in 1958 when The Queen made her first descent into a working coal mine, and a silver bowl engraved with a traditional blessing, presented by the Caledonian Club on the occasion of the Golden Jubilee in 2002.

For information and tickets visit www.rct.uk.

Two further Platinum Jubilee special displays will run at Windsor Castle (from 7th July) and at the Summer Opening of the State Rooms at Buckingham Palace (from 22nd July). Further details here.