Platinum Jubilee: The Queen’s Coronation will be open until 26th September and showcase items of Her Majesty’s dress and jewellery. 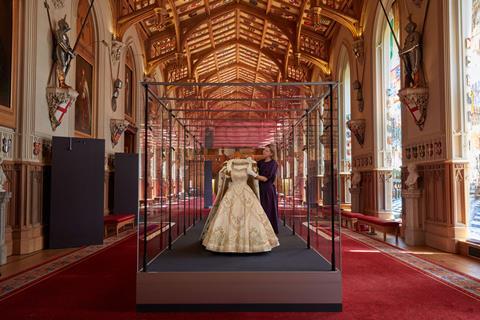 Curator Caroline de Guitaut puts the finishing touches to the display of Her Majesty The Queen’s Coronation Dress and Robe of Estate in St George’s Hall, Windsor Castle.

The Queen’s Coronation took place at Westminster Abbey on 2nd June 1953 with three million people lining the processional route in London and an estimated 27 million people – over half of the UK population – watching on TV. 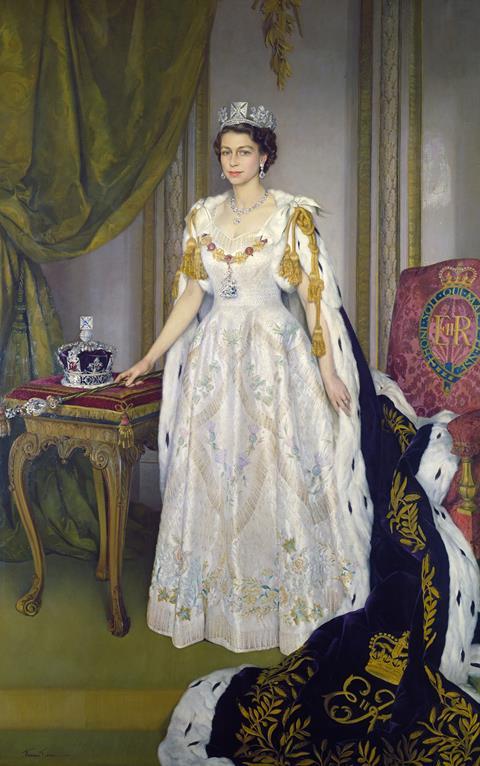 A highlight of the display is a portrait of The Queen by Sir Herbert James Gunn.

The display is included in general admission tickets to Windsor Castle and includes Her Majesty’s Coronation Dress and Robe of Estate which groups can see in St George’s Hall, the largest room in the castle.

Designed by the British couturier Sir Norman Hartnell, the Coronation Dress was created in the finest white duchesse satin, richly embroidered in a lattice-work effect with floral emblems in gold and silver thread and pastel-coloured silks, encrusted with seed pearls, sequins and crystals.

Hartnell, who had previously designed The Queen’s wedding dress in 1947, submitted eight designs for consideration. Her Majesty selected the eighth design but requested that the emblems of the seven independent states of which she was monarch be incorporated, together with those of England, Scotland, Ireland and Wales.

A colourful sketch of Hartnell’s ninth and final design is on display alongside original embroidery samples, giving visitors an insight into the process of designing the dress.

The goldwork embroidery design on the Queen’s Robe of Estate features wheat ears and olive branches, symbolising prosperity and peace. It took 12 embroideresses, using 18 different types of gold thread, more than 3,500 hours to complete the work between March and May 1953.

A highlight of Platinum Jubilee: The Queen’s Coronation will be a two and a half metre tall portrait of The Queen by Sir Herbert James Gunn.

Her Majesty is depicted in the Throne Room at Buckingham Palace wearing the Coronation Dress, Robe of Estate, Coronation Necklace and Earrings, Diamond Diadem and the Collar and Badge of the Most Noble Order of the Garter.

What else can visitors see?

For more information about group visits to Windsor Castle and tickets visit www.rct.uk/visit/windsor-castle.