Producers Jamie Wilson and Whoopi Goldberg have announced that Jennifer Saunders will reprise her role as Mother Superior in select performances for the UK tour of Sister Act the Musical, which also includes a range of new venues. 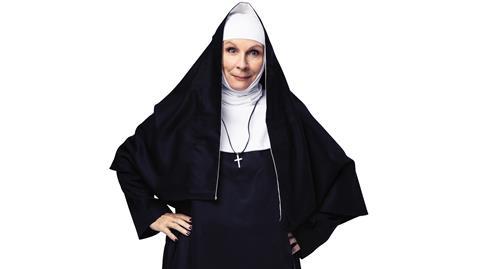 Jennifer Saunders is set to join the cast of Sister Act on selected dates.

She will join the previously announced Brenda Edwards and Clive Role who will play Deloris Van Cartier and Eddie Souther at selected venues respectively.

The multi award-winning actress, comedian and writer is one half of the comedy duo French and Saunders and also wrote and starred in five series, three specials and a feature film of her hit comedy Absolutely Fabulous.

Her many other TV credits include writing and starring in Jam and Jerusalem and guest starring in Friends and Roseanne. She was also the voice of the evil Fairy Godmother in Shrek 2.

Based on the film of the same name, the musical is said to be a tribute to the universal power of friendship, sisterhood and tells the story of a diva whose life takes a surprising turn when she witnesses a murder.

Under protective custody, she is hidden in a convent. Disguised as a nun and under the suspicious watch of Mother Superior, Deloris helps her fellow sisters find their voices as she unexpectedly rediscovers her own.