The 16-week production of My Fair Lady will run at the London Coliseum, the first major West End revival of the Lerner & Loewe’s musical in 21 years. 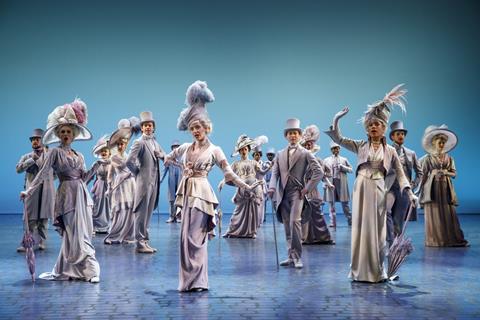 The company of the Lincoln Center Production of My Fair Lady.

New York’s Lincoln Center Theatre’s multi-award-winning production of My Fair Lady has announced it will transfer to the London Coliseum for 16 weeks from 7th May until 27th August.

My Fair Lady tells the story of Eliza Doolittle, a young Cockney flower seller, and Henry Higgins, a linguistics professor who is determined to transform her into his idea of a “proper lady”.

Directed by Bartlett Sher, the production will feature the English National Opera orchestra playing Frederick Loewe’s score and a book and lyrics by Alan Jay Lerner.

Songs include I Could Have Danced All Night, Get Me to the Church on Time, Wouldn’t It Be Loverly, On the Street Where You Live, The Rain in Spain and I’ve Grown Accustomed to Her Face.

The original 1956 Lerner & Loewe stage musical was based on George Bernard Shaw’s 1913 play Pygmalion. It went on to inspire the 1964 musical film, starring Audrey Hepburn as Eliza Doolittle and Rex Harrison as Henry Higgins.

My Fair Lady is running from 7th May until 27th August. Standard group rates are available on Monday to Thursday performances until Thursday 25th August 2022 (excluding 17th May and Premium Tickets). For more information and to book tickets visit www.eno.org.