ABBA musical, Mamma Mia! has announced its extension into next year, to mark its 20th anniversary in the West End. 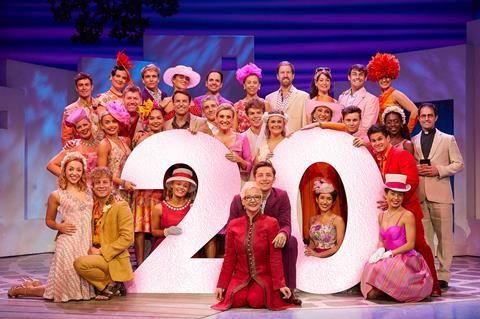 The London cast of Mamma Mia! celebrating its 20th year in the West End.

This year, the show celebrates its 20th birthday in London. Since premiering in the capital back in 1999, the feel good musical has captured the hearts of millions around the globe.

Currently playing at the Novello Theatre, the musical has now released more tickets, taking its booking period up to 7th March 2020.

The show is a funny tale of a mother, daughter and three possible fathers on a Greek island idyll, all unfolding to the magic of ABBA’s timeless pop masterpieces, including hit songs such a Honey, Honey, Mamma Mia, and Does Your Mother Know.

The musical has been seen live on stage by 65 million people across the world, and turned into two record-breaking movies - Mamma Mia! The Movie and Mamma Mia! Here We Go Again.

With music and lyrics by Benny Andersson and Björn Ulvaeus, Mamma Mia! is written by Catherine Johnson, directed by Phyllida Lloyd and choreographed by Anthony Van Laast.

Groups of ten plus can book special rate tickets for Monday to Friday performances.

History of the show

Mamma Mia! originally opened in London at the Prince Edward Theatre on 6th April 1999, before transferring to the Prince of Wales Theatre in 2004, and then to the Novello Theatre in 2012.

The London production has been seen by more than 8.9 million people, played over 8,000 performances and has broken box office records in all three of its London homes.

To date, Mamma Mia! has been seen in 50 productions in 16 different languages grossing more than $2 billion at the box office.