Producers Jamie Wilson and Whoopi Goldberg have revealed that Brenda Edwards will star in a rewritten version of Sister Act, opening at the Curve in Leicester, on 21st April 2020. 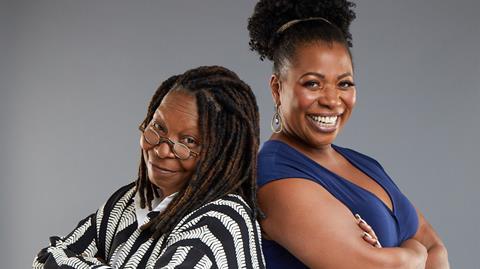 Whoopi Goldberg and Brenda Edwards ahead of the new Sister Act show taking to the road next year.

Edwards will take on the specially rewritten role of Deloris Van Cartier, embarking on several dates across the UK next year, with a London season and more cities still yet to be announced.

The actor first came to the public’s attention when she became a semi-finalist in the 2005 series of ITV’s The X Factor.

Since then, she has featured in a host of West End productions, including We Will Rock You, Chicago and Carousel.

Whoopi Goldberg, said: “Deloris is a big fun character with lots of personality. Brenda auditioned for this show when it first happened in the UK and didn’t get the part because she was too old, so we’ve rectified that.

Jamie Wilson, continued: “I am thrilled to be collaborating again with Alan Menken, Glenn Slater, Douglas Carter Beane and Whoopi Goldberg to create a new version of Sister Act, in particular reworking the part of Deloris for an older actor and I’m so pleased that the hugely talented Brenda Edwards will launch this production for us.”

The production is based on the original 1992 film of the same name, acting as a ‘sparkling tribute to the universal power of friendship and sisterhood’.

The story revolves around the life of Deloris, originally played by Whoopi Goldberg herself, who witnesses a murder and has to be placed into protective custody at a convent, disguised as a nun.

Featuring music from Alan Menken (Disney’s Aladdin and Enchanted), the show is still yet to reveal its full creative team and cast.

Whoopi Goldberg, added: “I really am so thrilled Sister Act is coming back to the UK in 2020 with this new version.”