A new production of Irving Berlin’s White Christmas will open at London’s Dominion Theatre this November with group tickets now on sale. 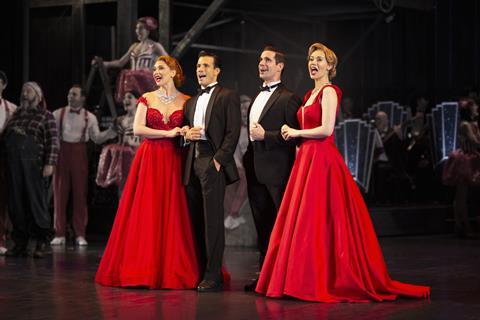 White Christmas will open at the West End theatre on 15th November where it will run until 4th January 2020.

The musical will star Strictly Come Dancing finalist Danny Mac as Bob Wallace and Dan Burton as Phil Davis, who both reprise their acclaimed roles following the successful run at the Curve Theatre, Leicester. Further casting will be announced soon.

The musical has music and lyrics by Irving Berlin and a book by David Ives and Paul Blake. It is directed by Curve artistic director Nikolai Foster (Annie, Breakfast at Tiffany’s) and choreographed by two-time Olivier Award-winning choreographer Stephen Mear (Mary Poppins, Gypsy).

Danny Mac’s many theatre credits include Joe Gillis in the recent tour of Sunset Boulevard, Gabey in On The Town at Regent’s Park Open Air Theatre and the West End productions of Wicked and Legally Blonde. He also captured the nation’s hearts and received huge support during his time on BBC1’s Strictly Come Dancing, making it all the way to the final in 2017.

Dan Burton was nominated for an Olivier for his performance as Tulsa in Gypsy at the Savoy Theatre. His other West End credits include Jersey Boys, The Pajama Game, Chicago, Legally Blonde, Betty Blue Eyes and Guys and Dolls at the Royal Albert Hall.

Special rates are available for White Christmas and details can be found on the website.