Falsettos the musical has revealed its all-new cast that will take to the West End stage for a limited season from 30th August to 23rd November. 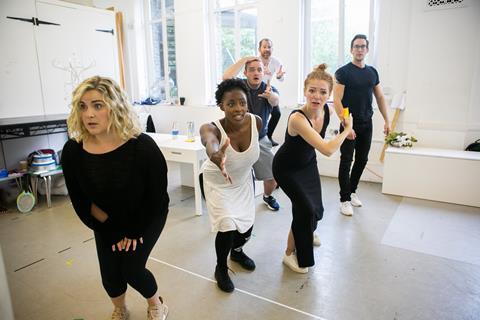 The cast preparing in rehearsals ahead of the hilarious premiere of Falsettos.

The trio are joined by Gemma Knight-Jones as Charlotte, Laura Pitt-Pulford as Trina and Oliver Savile as Whizzer in this ‘poignant look at a modern family.’

The Other Palace Theatre in London Victoria will host the show on its debut West End run.

The production revolves around the ‘life of a gay man Marvin, his wife, his lover, his soon to be bar mitzvahed son, their psychiatrist and the lesbian neighbours.’

Its director and choreographer, Tara Overfield-Wilkinson, has previously worked with Come From Away, Motown The Musical and Little Shop Of Horrors.

Further information about the cast

Natasha J Barnes’ stage credits include The Twilight Zone at the Ambassadors Theatre, Wasted at Southwark Playhouse, Tryst at Tabard Theatre and Funny Girl at the Menier Chocolate Factory. 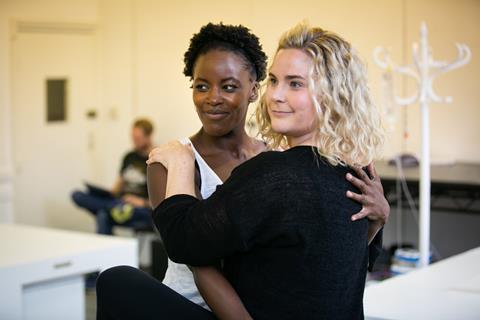 Daniel Boys’ stage credits include The Boys in the Band at Park Theatre, on UK Tour and Vaudeville Theatre, Miss Atomic Bomb at The Other Palace and Spoonful of Sherman at Live At Zedel.

Joel Montague has a heap of musical thatre experience, previously starring in Kiss Me Kate, School Of Rock and Funny Girl.

Gemma Knight-Jones has performed in The Lion King at the Lyceum Theatre and Oliver Savile in Wicked at the Apollo Victoria Theatre.

For more information about the show and tickets, visit www.falsettoslondon.com