The hit musical Mamma Mia! will return to London’s West End at the Novello Theatre on 25th August, with some of the show’s previous stars returning to their former roles. 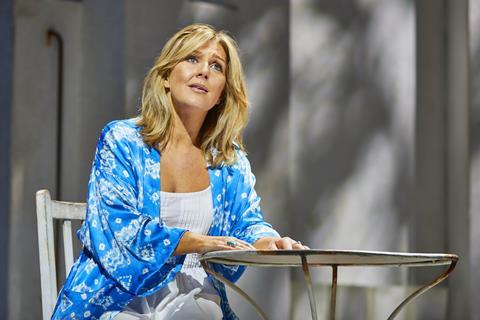 Mazz Murray will return to the role of Donna.

Returning to the cast will be Mazz Murray as Donna, Richard Trinder as Sam, Neil Moors as Harry, Stephen Beckett as Bill, and Sophie Matthew as Lisa.

They will be joined by Josie Benson (Camila Rosario in original London cast of In The Heights) as Tanya, Gemma Goggin (Doctor Faustus and Don Quixote for the RSC) as Rosie, and Emma Mullen (lead role of Rosie in series five of Shetland on BBC1) as Sophie.

The rest of the main cast is made up by Jack Danson (2020 graduate) as Sky, Tegan Bannister (Eponine in the UK Tour of Les Misérables) as Ali, Michael Nelson (Eddie in the UK & International Tour of Mamma Mia!) as Eddie and Alexandros Beshonges (2020 graduate) as Pepper, with Natalie Langston (Alternate Eva Peron in Evita at Phoenix Theatre) playing the role of Donna at certain performances.

Delighted to be welcoming people back

Now in its 23rd year in London, producer Judy Craymer is delighted to be welcoming people back once again to the musical. She said: “We cannot wait to get the full theatrical experience of Mamma Mia! back into the West End and what better way to leave lockdown than to be transported to our sunny Greek idyll.” 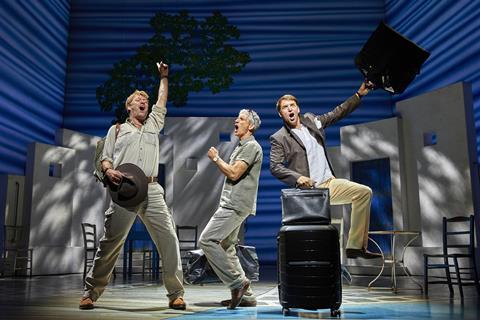 The musical originally opened in London at the Prince Edward Theatre on 6th April 1999, before transferring to the Prince of Wales Theatre in 2004, and then to the Novello Theatre in 2012.

The London production has been seen by more than nine million people, played over 8,500 performances and has broken box office records in all three of its London homes.

Following the story of a mother, a daughter and three possible dads on a Greek island idyll, Mamma Mia! includes several of ABBA’s timeless songs, including Super Trouper, Money Money Money, Take a Chance on Me and many more.

Mamma Mia! is currently booking until 2nd April 2022, with group rates available for ten or more people. More information is available at mamma-mia.com