The full cast has been announced for the new musical which opens in February 2020 and special rates are available for groups. 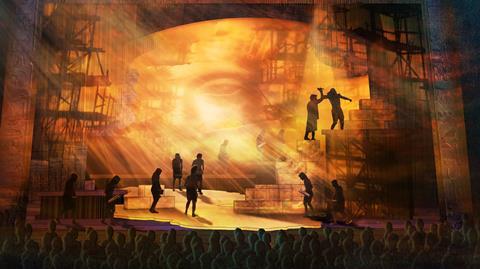 The first illustration of The Prince of Egypt musical set design, by Kevin Depinet, has been released.

Tickets are now on sale for the production which is based on the DreamWorks Animation film and features the Academy award-winning song When You Believe.

The Prince of Egypt musical begins a 32-week run at London’s Dominion Theatre early next year with music and lyrics by Stephen Schwartz (Wicked, Godspell) and a book by Philip LaZebnik (Mulan, Pocahontas).

The Prince of Egypt will be led by Luke Brady (Sweeney Todd) as Moses and Liam Tamne (The Phantom of the Opera, Les Misérables and Wicked) as Ramses.

Producers have also released the first set design image for the new musical.

The cast of the new production at a recent launch event.

The Prince of Egypt features 10 new songs written by Stephen Schwartz, together with five of his acclaimed songs from the DreamWorks Animation film, including Deliver Us, All I Ever Wanted, Through Heaven’s Eyes and the Academy Award®-winning When You Believe (which was a global hit for Whitney Houston and Mariah Carey as well as a UK chart-topping winner’s single for The X-Factor).