Fred. Olsen Cruise Lines has launched its 2022/23 cruise programme featuring a host of sailings around the British Isles, European city breaks as well as an ‘Around the World in 80 Days’ itinerary. 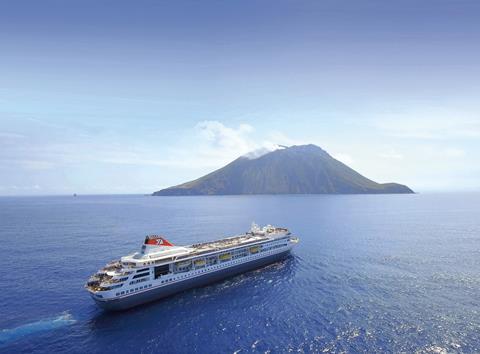 The cruise programme features several closer to home excursions, including itineraries visiting the remote islands of Scilly, Shetland and Orkney as well as Ireland and parts of England.

Also included in the programme are a number of five-day city breaks in Europe, trips to the Norwegian or Greenlandic fjords, the Canaries, some of the Mediterranean’s best islands and even a 103-night ‘once in a lifetime’ worldwide cruise.

Fred. Olsen’s group sales team are now taking bookings for the 2022/23 programme, confirming that they have been “overwhelmed with new group enquiries since the launch of the new brochure.”

Devon & Cornwall in Five Nights (departs Southampton on 15th April, 2022): Braemar will dock close to the centre of Falmouth overnight - the town has several sights and attractions to discover such as St Michael’s Mount, the Lizard Peninsula and the nearby Eden Project.

Irish City Break (departs Liverpool 19th November 2022): for a closer to home visit which captures Ireland’s iconic culture, Borealis will take passengers on a five-night voyage which includes visits to the Guinness factory in Dublin, Giant’s Causeway and Blarney Castle.

Around the World, Southampton to Liverpool (departs 6th January 2022): groups opting for the 103-night cruise will sail to some of the world’s most iconic landmarks, visiting the likes of the Bahamas, USA, Costa Rica, New Zealand, Australia, India, Egypt, Greece and more.

A framework for the safe return of international travel for UK travellers has now been set out by the Government.

A report, produced by the Global Travel Task Force (GTT), shows how international travel, including cruises, could resume from 17th May at the earliest in a new traffic light system.

Cruise Lines International Association (CLIA) said in a statement: “We welcome the announcement to restart international cruises alongside the wider resumption of international travel, in line with the “traffic light” system.

“This announcement is the culmination of extensive collaboration between industry, government, health authorities and ports during the last 12 months to further strengthen health measures, which now go beyond any other travel sector. The industry’s protocols have already been tried and tested as almost 400,000 people have sailed on cruises since last summer elsewhere around the globe.

“The decision sends a signal of confidence in the industry and is a welcome boost to the thousands of people employed in the sector or whose livelihoods depend upon cruise, including travel agencies, hotels, tour guides, port operators and many other service providers up and down the country.”

For more information on all of Fred. Olsen Cruise Line’s sailings, visit www.fredolsencruises.com/new-cruise-programme.