A musical comedy based on Charles Addams’ gothic characters will take to stages across the UK and Ireland from July. 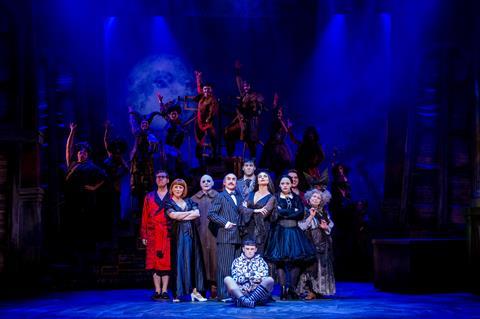 The Addams Family musical set out on a premiere tour back in 2017.

The Addams Family began life as cartoons drawn by Charles Addams in 1938, going on to inspire numerous animated adaptations, films and books. Later came a musical interpretation that appeared on Broadway back in 2010, and is now set to make its way around the UK and Ireland for the first time.

The family, who enjoy all things macabre and gothic, are made up of husband and wife Gomez and Morticia and their two children, Wednesday and Pugsley. In the musical, Wednesday – ‘the ultimate princess of darkness’ – has fallen in love with a ‘normal’ young man from a respected family. The story follows the comedic consequences of the two families meeting for dinner.

Want to be the first to know?

Sign up for the free Theatre Bug e-newsletter to receive the hottest show news and great group offers.

Theatre News, Reviews and What’s Best for Groups sent to your inbox every fortnight.

Samantha Womack and Cameron Blakely will reprise their roles as Morticia and Gomez, following a successful premiere run in 2017. Samantha Womack is best known for playing Ronnie Mitchell in EastEnders, and has also starred in the stage adaptation of The Girl on the Train. Audiences might recognise Cameron Blakely as Thenardier in the West End’s Les Miserables, or from his appearances at Regent’s Park Open Air Theatre in Shakespeare’s A Midsummer Night’s Dream, Hamlet and Romeo and Juliet.

Tickets are now available for the tour, which opens at the Newcastle Theatre Royal on 30th July with performances running to 8th August. It will then head to the following venues:

Matthew White is confirmed as the musical’s director following work on Mr Stink, Carousel, and Little Shop of Horrors.

Find out more at www.theaddamsfamily.co.uk. Groups should contact specific venues for information on group bookings.