The North Yorkshire Moors Railway (NYMR) has announced a series of exclusive journeys to celebrate the return of locomotive No. 4498 Sir Nigel Gresley, which is back in service after a seven-year overhaul. 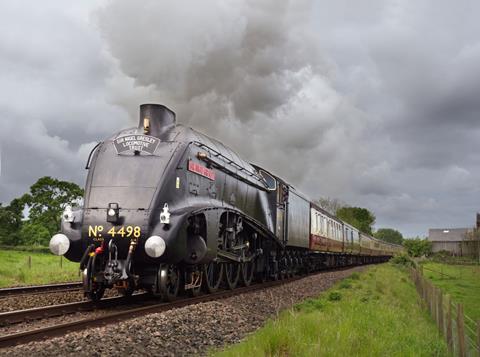 The ’Sir Nigel Gresley’ set the post-war speed record for steam traction of 112mph in 1959.

Groups will get to travel in authentic teak carriages, restored by the LNER Coach Association (LNERCA) on the service, which will run three times a day on selected dates in October.

The locomotive will depart from Grosmont to Pickering at 9.30am, 12.30pm and 3.30pm on the 3rd, 4th, 5th, 10th, 11th and 12th October, with a special rate for groups of 20+. For a more exclusive experience, group travel organisers can buy a compartment ticket for up to a maximum of six people.

On arrival at Pickering station, visitors will have 15 minutes to take photographs of the iconic locomotive. A limited number of tickets will be available on the day to visit the locomotive footplate via the unique corridor tender – originally used for footplate crews to change shifts without the need to stop.

Nigel Wilson, chairman of the Sir Nigel Gresley Locomotive Trust which owns No. 4498, said: “We are delighted to be visiting the NYMR this autumn and hope passengers will enjoy the exclusive experience of travelling behind the only operational class A4 ‘pacific’.”

It was the 100th Gresley Pacific built by the London and North Eastern Railway. The locomotive was mainly based at London King’s Cross, with a spell at Grantham during the Second World War and was briefly re-numbered as No. 7 before becoming No. 60007 when the LNER was merged into British Railways.

On 3rd June 1956 Sir Nigel Gresley had the honour of hauling the Royal Train from Kings Cross to York with H.M the Queen on board. The “Stephenson Locomotive Society Special” of the 23rd May 1959 was the first train in the UK with a booked or advertised schedule of over 100mph and during that trip No. 60007 set the official post-war speed record for steam traction of 112mph.

Chris Price, CEO of the NYMR said: “We’ve been so excited to announce this not-to-be-missed experience to witness and enjoy such an iconic piece of railway history. The whole NYMR team is incredibly proud to be able to facilitate this journey and can’t wait to welcome passengers along to the event marking 85 years since the locomotive originally entered service in November 1937.”

For more information on the journey and to purchase tickets, visit: nymr.co.uk/sir-nigel-gresley