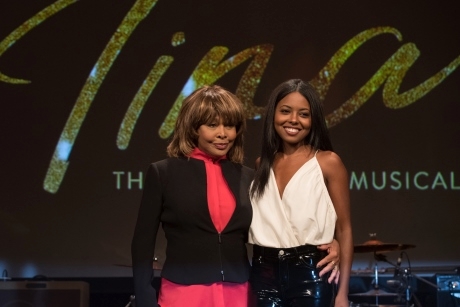 Adrienne Warren has been announced as the actress set to play Tina Turner in the upcoming show, Tina: The Tina Turner Musical.

The show is expected to open next spring at the Aldwych Theatre in London. Performances will begin on 21st March 2018.

From humble beginnings in Nutbush, Tennessee, to her transformation into the global Queen of Rock ‘n’ Roll, Tina Turner didn’t just break the rules, she rewrote them. This new stage musical, presented in association with Tina Turner herself, reveals the untold story of a woman who dared to defy the bounds of her age, gender and race.

Adrienne Warren will make her West End stage debut as Tina. Her most recent theatre credit was in Shuffle Along at the Music Box Theatre on Broadway, for which she received a Tony nomination. Her other US theatre credits include Bring it On the Musical at St. James Theatre, Dreamgirls at the Apollo Theatre, which was followed by a National Tour, and The Wiz at Encores City Centre.

Warren commented: “Growing up watching Tina, I knew how to shake my hips before I could tie my shoes! I am so grateful to our creative team and producers for entrusting me with this responsibility.  I say responsibility, because I am a Tina Turner fan first. I am elated, honoured and humbled.  Meeting and working with Tina is and will always be one of the great moments of my life.”

At the official launch event, Tina Turner said: “It has been my joy to introduce Adrienne today. From the moment I met her at our last workshop I saw her exceptional talent. Playing this role will require immense physical and emotional commitment, and bravery too. We are thrilled to have found Adrienne, and I very much look forward to spending more time together and developing a special friendship I know will grow even stronger as we prepare the production for the Aldwych Theatre. We can’t wait to welcome her to the show.”

Further information, including full casting will be revealed shortly. Group tickets are available, with discounted prices for groups with eight or more and groups with 20 or more.