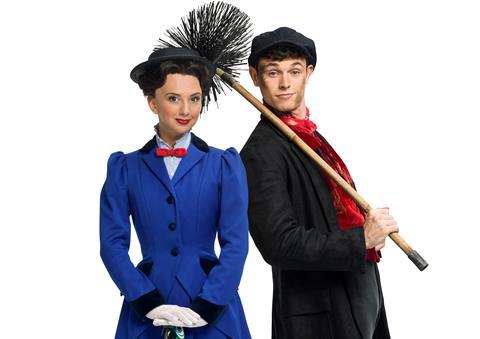 Zizi Strallen will lead as Mary while Charlie Stemp will play Bert in the new West End run of Mary Poppins.

The award-winning production of Mary Poppins will return to its original West End home for performances in 2019.

It will open at the Prince Edward Theatre, its original home, when Disney’s Aladdin ends its run in late August next year.

The production will star Zizi Strallen, who returns to play the title role and Charlie Stemp as Bert, who last year gave an award-winning performance as Arthur Kipps in Cameron Mackintosh’s production of Half A Sixpence.

Tickets for Mary Poppins will go on sale in January 2019.  Further details will be announced in due course, including full booking information.

Cameron Mackintosh, who has co-created the stage production, said: “I’m thrilled to be bringing the internationally acclaimed new staging of Pamela Travers’ magical stories back to London in, with Disney, featuring the dazzling talents of Zizi Strallen and Charlie Stemp as Mary and Bert.

“The original production, over 14 years ago, only played London and Broadway and subsequently was revised and continues to be staged around the world with phenomenal success.

Zizi Strallen, who will lead as Mary, is currently playing Fran in Strictly Ballroom The Musical at the Piccadilly Theatre.  Her previous theatre credits include Follies at the National Theatre, Mary Poppins on tour in the UK, Ireland and in Dubai, Matthew Bourne’s The Car Man and Cinderella at Sadler’s Wells and on tour and Cats and Scrooge at the London Palladium.

Charlie Stemp, who will play Bert, most recently played Barnaby Tucker in the Broadway production of Hello, Dolly! opposite Bette Midler and Bernadette Peters. He previously played the title role in last year’s Palladium pantomime Dick Whittington, following his critically acclaimed performance as Arthur Kipps in Half a Sixpence at the Noël Coward Theatre, a role he first performed at Chichester Festival Theatre.

The stage production of Mary Poppins, which has been seen by more than 11 million people worldwide, originally opened in the West End in December 2004, running for three years. It has subsequently toured the UK and Ireland, the US, Australia, New Zealand and played in Holland, Mexico, Austria, Switzerland, Dubai, Japan and Germany where the production continues its  run in Hamburg.