The hit West End musical will now run until November 2020 at London’s Apollo Victoria Theatre, taking the world of Oz well into 2020 for its 14th year in the capital. 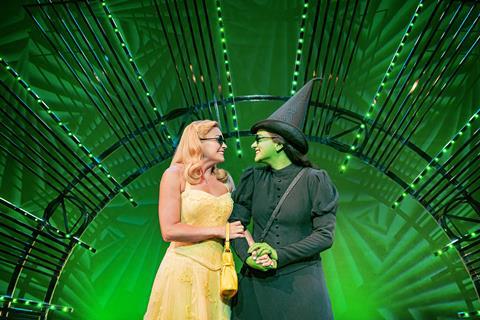 Helen Woolf (left) and Nikki Bentley star in the hit production which will now run until November 2020.

Since the production first opened in 2006, it has been seen by ten million people, playing over 5,500 performances.

The latest batch of tickets means there will be performances from Monday 25th May until Saturday 28th November 2020, with 12 extra shows revealed over the 2019 Christmas period too.

Based on the acclaimed, best-selling novel by Gregory Maguire, Wicked imagines an ingenious back story and future possibilities to the lives of L. Frank Baum’s beloved characters from The Wonderful Wizard of Oz.

It reveals the decisions and events that shape the destinies of two unlikely university friends on their journey to becoming Glinda The Good and the Wicked Witch of the West.

Music and lyrics for the show are by Oscar, Golden Globe and Grammy Award-winner Stephen Schwartz, who has worked on Godspell, Pocahontas, The Hunchback of NotreDame and The Prince of Egypt.

Nikki Bentley stars as the lead character Elphaba, who also becomes known as the Wicked Witch of the West, and her university friend Glinda is played by Helen Woolf.

The rest of the main cast is made up of Natasha Ferguson as Nessarose (maternity cover for Carina Gillespie) and George Ure as Boq (Nicholas McLean plays Boq from 20th January 2020).

One free group organiser/leader ticket applies per booking for groups of ten or more (the 11th ticket is free).

There’s further reductions for groups of 35 or more too.

You can find more information about the show and tickets at www.wickedthemusical.co.uk/london