A series of productions will take to the stage at Regent’s Park Open Air Theatre throughout 2020, ranging from a much-loved childrens’ favourite to one of Shakespeare’s classics. 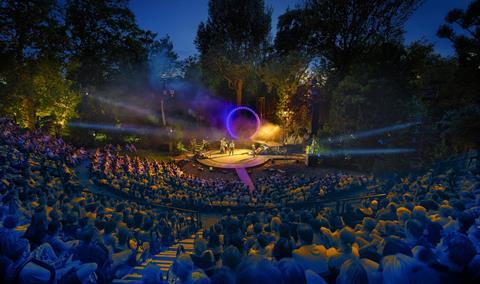 Groups can immerse themselves in the stunning outdoor scenery of Regent’s Park while watching a show.

The London theatre will open its theatre season with its first newly commissioned musical, 101 Dalmations, that will run from 16th May until 21st June.

Based on Dodie Smith’s lovable tale of the same name, the production is directed by Timothy Sheader and features music and lyrics by Douglas Hodge.

Rodgers and Hammerstein’s Carousel will conclude the season, running from 31st until 19th September, featuring a score that includes If I Loved You and You’ll Never Walk Alone.

What else to look out for

The show is produced by the same team that created Dinosaur World Live, taking audience members ‘into a magical world of myths and legends’.

Regent’s Park Open Air Theatre is one of the largest theatres in London and was established in 1932, situated in the beautiful surroundings of a Royal Park.

Both its stage and auditorium are entirely uncovered, with the theatre celebrated for its bold and dynamic productions (The Turn of the Screw, Little Shop of Horrors, The Seagull, Porgy and Bess, The Crucible, Henry V), with audiences of more than 140,000 each year during its 18-week season.

For more information about tickets and the shows playing at the Open Air Theatre across next year, visit www.openairtheatre.com