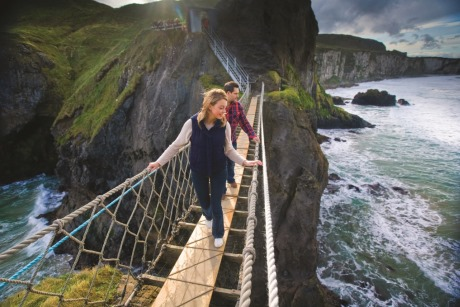 On the heels of Lonely Planet hailing Belfast and the Causeway Coast as its number one area to visit on the globe in 2018, we take a look at some of the Emerald Isle’s top sites and attractions for groups.

Here, we list just a few reasons for groups to book a visit next year – but be assured there are hundreds more things to do there, all of which you can discover for yourself when you next take a group visit.

The cobbled streets that hug the River Liffey are awash with the ghosts of Irish literature, from Samuel Beckett to James Joyce. You can feel their spirit at the famous Trinity College or by joining a literary tour.

Guinness fans should check out Dublin’s Guinness Storehouse, a fascinating experience that goes beyond merely explaining its production to look at how it’s advertised around the world.

Pictured: Guinness - try it on a tour of the Storehouse in Dublin.

And the Irish Whiskey Museum is the place to head for groups wanting to know more about the country’s rich bounty of whiskeys, and comes complete with interactive, ultra-modern tours.

Further highlights include The Gobbins coastal path which has recently re-opened, and Carrick-a-Rede, an iconic 100ft rope bridge. Originally built by salmon fisherman, it is a thrilling way to appreciate the wildness of the landscape as you scan the waters for porpoises, dolphins and whales.

Belfast’s shipbuilding past leaves a lasting mark on the cityscape, notably the white-star inspired Titanic Belfast exhibition structure which holds the impressive title as the World’s Leading Tourist Attraction. Plus, the HMS Caroline – the last survivor of the Battle of Jutland – will re-open in 2018, offering more scope for groups with an interest in maritime heritage.

The intriguing political story of Belfast can be heard through visits to Crumlin Road Gaol, the parliament building of Stormont, or the street art peace murals with which the city is synonymous.

There is also a great food and shopping scene here, and when in town be sure to check out the National Trust pub - Crown Liquor Saloon for a refreshing pint or point of view.

The Wild Atlantic Way is a spectacular drive or cycle, spreading around over 1,500 miles of Ireland’s west coast and north and south littorals. En route it sweeps around nine counties and three provinces, arching from County Donegal’s Inishowen Peninsula to Kinsale, County Cork, on the Celtic Sea. In total there are 157 ‘discovery points’, over 1,000 attractions and more than 2,500 activities, so groups certainly won’t be short of things to see and do.

Highlight activities for groups can include a private boat trip in search of basking sharks and orcas from Culdaff, Greencastle or Rathmullan, and a visit to the towering Cliffs of Moher in County Clare which offer views out over the Aran Islands.

For further inspiration about Ireland and its offerings to groups, visit www.visitireland.com.

Look out for the December edition of Group Leisure & Travel which includes a special Ireland feature.