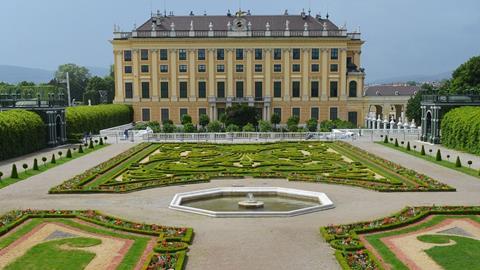 For the second part of our series, Cruise writer Jane Archer looks at cruising the Danube and gardens inspired by Claude Monet.

With its grand palaces, Mozart and Strauss concerts and the white Lipizzaner horses, Vienna is not an obvious spot for a group of keen gardeners. Until you realise that it is also home to the Schönbrunn Palace and Gardens, which are so spectacular they have each been granted UNESCO World Heritage status.

Most river cruise passengers make a bee-line for the palace, for former summer residence of the Habsburgs who ruled the Austria and Hungary until 1918. It is a grand place indeed, with more than 1,400 rooms (don’t worry, tours only visit a fraction of them!) and lavish décor, but your group of keen horticulturalists will be more interested in the garden.

They are vast, with a magnificent baroque-style parterre, a maze, glasshouses containing palms and cacti, an orangery, statues, fountains and a whole lot more. Gloriette, on a hill across from the palace, has spectacular views but be warned: it is a stiff climb up.

Crystal River Cruises offer a tour of the palace and gardens on 10-day voyages of the Danube from Vienna to Budapest and back. In the Hungarian capital, consider organising a tour of the botanical gardens, which dates back to 1771 and houses 8,000 plant species. Aim for April to catch an annual Cherry Blossom Festival held there.

The saying ‘pretty as a picture’ might have been coined for the water garden that impressionist painter Claude Monet created at his home in Giverny in France as he really did immortalise it in oils.

Whether you’re into plants of not, the garden is one of the highlights of a cruise on the Seine thanks to its gorgeous weeping willows, Japanese acers and the famous water lilies, while the flower garden he planted in front of his house is just beautiful (try to go in June or July when everything is in bloom).

A-Rosa’ Seine cruises round-trip from Paris offers excursions to Monet’s garden and Versailles, the latter including time to visit the gardens, for an extra cost. Avalon Waterways’ seven-night Paris to Normandy cruises include trips to Giverny and Chateau de Malmaison, where Josephine Bonaparte, wife of Napoleon, lived and created a ‘curious garden’ with rare and exotic plants as well as more than 250 varieties of roses.

Heard the one about Prussia’s potato king? It’s no joke. Frederick the Great was admired for many things, not least introducing spuds to the German diet. In fact, the Germans are so grateful they still put potatoes on his grave by the palace in Sanssouci in Potsdam, where Frederick came for a spot of downtime between waging wars with the French, Austrians and Poles (the name means without worry).

The palace is fine, rather like an oversized summer house from the outside, but the gardens are the real treat. A vine-clad terrace leads down from the palace to a baroque-style ornamental garden modelled on the one at Versailles and then opens out into parkland dotted with statues, temples and follies including an extraordinary Chinese House and Temple of Friendship

A tour of the park and gardens is one of the highlights of CroisiEurope’s nine-day Elbe cruises between Berlin to Prague. Alternatively consider one of Viking River Cruises Elegant Elbe sailings as these not only visit Sanssouci but also Wörlitz Park in Dessau, which was designed according to the principles of an English landscape garden, with a lake, follies and even an artificial volcano used to created pictures as you walk around.

Be aware that Viking’s Sanssouci visit focuses on the palace. Garden fans can skip the tour and explore outside instead; better still, add a couple of days in Berlin at the start or end of the cruise so your group can do both.

Not read part one? Find out what jane Archer had to say in our previous article.