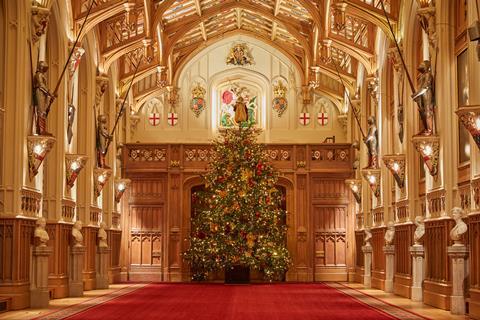 The Christmas tree in St George's Hall at Windsor Castle. 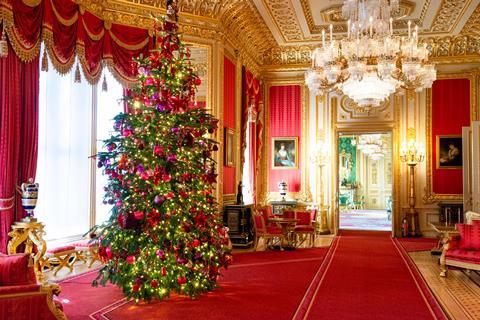 The Christmas tree in the Crimson Drawing Room at Windsor Castle. 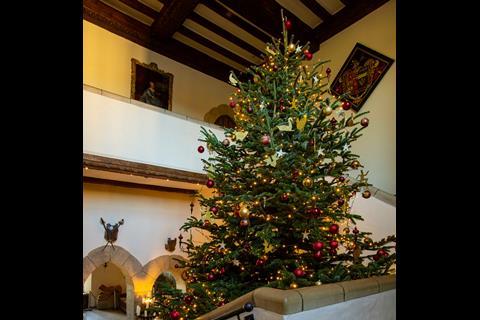 One of the trees at Leeds Castle rising up into the stairwell. 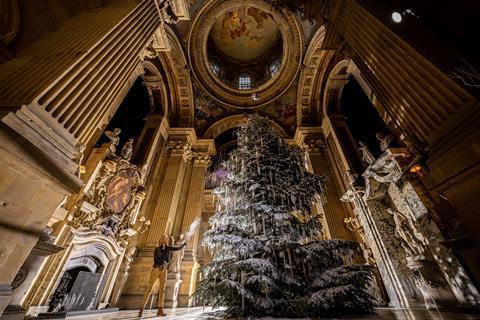 Designer Bretta Gerecke applies the finishing touches to the tree in the Great Hall. 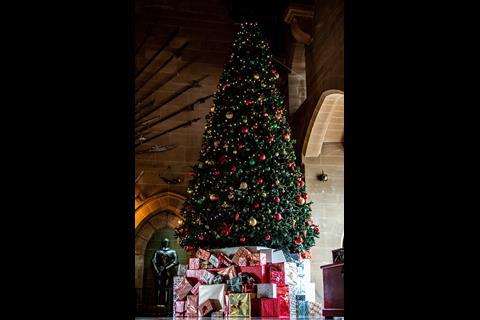 As well as the 20-foot high tree, festive highlights include a light trail with dancing light projections. 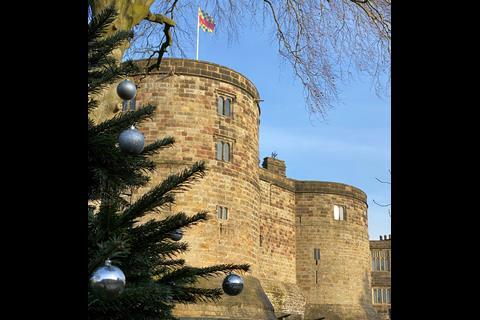 The Christmas Tree at Skipton Castle turned on its lights earlier this month.

We’ve seen some lovely photos of Christmas trees popping up in and around some of England’s top castles to celebrate the season, so we thought we’d share some of our favourites. Let the countdown begin!

The Christmas trees in the State Apartments of Windsor Castle are decorated with twinkling lights and festive garlands. A highlight is the magnificent 20-foot-high tree in St George’s Hall, taken from Windsor Great Park and dressed with hundreds of iridescent glass and mirrored ornaments. Meanwhile, the Crimson Drawing Room in the semi-state rooms at Windsor Castle features the spectacular tree below.

The tree at Raby Castle twinkles by the toasty log fire in the Entrance Hall, in readiness for Fireside Stories with Father Christmas, the estate’s annual tradition.

This season, Leeds Castle has decorated the castle with magnificent Christmas trees ranging from 8ft to 22ft, all of which are themed to the 12 Days of Christmas. The team says it took months of preparation to organise and theme – this year it was created by florist and designer Louise Roots and dressing the castle took around a week to complete by a team of staff and volunteers.

The tree outside Oxford Castle & Prison this year welcomes visitors for its festive guided tours which, throughout the whole of December, are led by costumed guides bearing lanterns. This year’s tree is positioned in the castle yard with its backdrop against Debtor’s Tower and D-Wing. The 24-footer was donated by St. John’s College and transportation was organised by Oxford Preservation Trust. Oxfordshire County Council assisted the castle’s general manager Chris Abbott with decorating the tree with a cherry picker.

December sees Lincoln Castle sparkle with seasonal spirit as its popular after-dark illuminations return to light up the heritage attraction for the festive season. The specially lit Medieval Wall Walk – a third of a mile-long route around the stone curtain wall – returns as part of the illuminations which sees the grounds shine with Christmas lights and Christmas tree-lined pathways.

This 28-footer at Castle Howard is their tallest ever, filling the floorspace of the Great Hall and huge galleried dome above it. The ‘snow’ on the branches is a realistic paper-based artificial snow, which was blown on to the tree using an artificial snowstorm to ensure it looks like a tree in a snowy forest.

Getting the tree into the Great Hall through the existing doorway on the North Front was a challenge in itself, says the team. As a listed building, the tree had to be squeezed through double glass doors, before it was raised into position and a supportive base built in situ. The tree will require constant attention over the coming weeks to keep it looking fresh – a water reservoir will keep feeding it so the tree remains verdant until the new year.

This season at Warwick Castle sees twinkling trees, dazzling decorations and festive flourishes with the Great Hall and Staterooms and visitors can marvel at the renowned 20-foot high Christmas tree.

The trees at Hever Castle arrived in the second week of November and, as they have to last six to eight weeks, they are put in at the last minute and well watered (especially the ones near the open fires). This year all the trees were locally sourced from Hole Park in Cranbrook, Kent. The team told us it takes around ten people two days to dress the castle for Christmas – this is its largest tree, in the castle’s Inner Hall.

And finally, a sneaky glimpse of the tree here at Skipton Castle, which is in situ outside the medieval fortress in North Yorkshire.