Shakespeare's Globe and The View from The Shard: In the eye of the beholder

Laura Sexton reports back from an exciting Reader Club Trip to Shakespeare’s Globe and The View from the Shard. 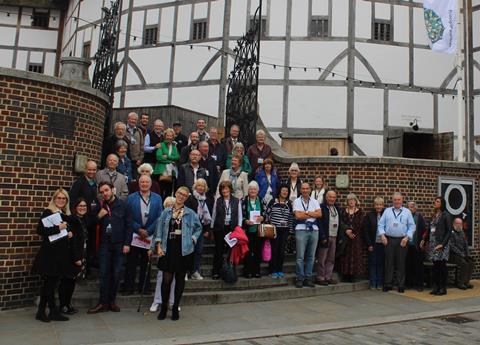 GTOs started the day off at Shakespeare’s Globe.

Myself and around 40 group travel organisers enjoyed a jam-packed outing to Shakespeare’s Globe and The Shard in London recently; a trip that put the city is a new light.

He’s got the whole world in his hands

Our day began at Shakespeare’s Globe, situated on the south bank of the River Thames. With its beautiful thatched roof, it looks a bit out of place amongst the modern skyscrapers that surround it. But despite being tucked away, the Shakespearean theatre, as I soon found out, is an attraction you won’t forget.

“I enjoyed everything on this trip. The theatre was wonderful, and the staff have all be so welcoming. Kaja, our guide, was brilliant. Lunch was very tasty, and I enjoyed the views from the top of The Shard too. I’d definitely consider bringing my group. It’s all been very well organised.”

The structure that we see today was completed in 1997, but you’d never have known. It has been created to look as close to the original as possible. In fact, the two pillars on the stage are made from trees which were alive when Shakespeare was (a fact which sent a ripple of ‘ooos’ throughout the group).

But despite its glorious form, it was our tour guide Kaja, who made the trip so memorable. Kaja took our group inside the theatre itself, and as we sat on the benched seating, we gripped to her every word. Did you know that The Globe can seat 900 people and have 700 people standing? Or that audience members would sometimes have to catch the actors if they fell off the stage? She was so knowledgeable and passionate about Shakespeare, his plays and the theatre, that many group organisers remarked that they’d return with their group just to have her guide them round.

We then made our way to Pizza Express for lunch, which was practically next door (although I’m certain it wasn’t during Shakespeare’s time!). The GTOs and I enjoyed a rather lavish selection of pizzas, from margheritas to spicy pepperoni. Over lunch, a buzz of inspired chatter could be heard from our table as we all discussed the morning and got to know one another.

“These Reader Club trips are a great way of getting information regarding group travel. It’s one thing passing on a leaflet, but to actually experience and see for yourself what a place is like, there’s no comparison. I enjoyed The Globe as you get all the history, which is all brought to life. Seeing the costume demonstration was really fun too.”

To be, or not to be: That is the question

Next on our Reader Club agenda was the Globe exhibition which is housed to the right of the theatre. Here we were given audio guides and time to enjoy the displays which included models of The Globe and Rose Theatre and costumes including an extremely elaborate one made for the character of Elizabeth I.

Having all been inspired by these costumes, I was later volunteered to take part in a costume demonstration and was dressed up as Ophelia from Hamlet. The costume guides explained each part of the attire which featured stockings, garters, petticoats and the dreaded corset – which I can confirm, is rather difficult to breathe in. 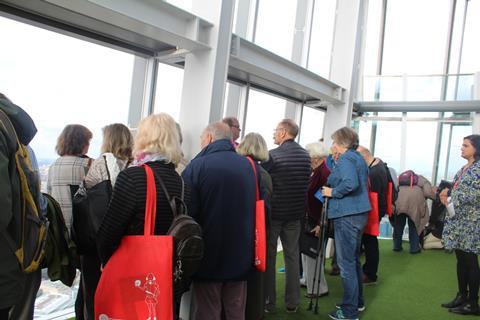 GTOs enjoyed the views at The View from the Shard.

Our next stop was The Shard, which is relatively close to the theatre and took us about 15 minutes to walk to. We were lucky that our walk took us through Borough Market, where we could enjoy succulent smells of street food and artisan delights. We also walked passed Sir Francis Drake’s ship, The Golden Hinde, and spotted Southwark Cathedral enroute.

As you approach The Shard the sudden realisation of its height becomes apparent as it magnificently towers above you. Our guide, Simon, looked after the group well and was extremely friendly, making jokes along the way as we entered the two lifts to reach the top at Level 72, where The View from the Shard attraction sits. The elevators, we were told, move at about six metres per seconds. It felt like we were inside Roald Dahl’s glass elevator, as all our ears popped from the speed.

“The whole trip was great. The Globe was excellent, and the Shard was the icing on the cake. Kaja was so knowledgeable and passionate which really made the trip memorable.”

Once at the top, the spectacles, which stretch about 40 miles, were awe-inspiring. Simon took us around and pointed out key landmarks, such as Wembley Station, the BT Tower, and The Coca Cola London Eye. We were lucky enough to witness Tower Bridge opening too, as four tall ships approached – a sight, which from above, looked incredible.

To be able to see London from such a height was a first for most and we were fortunate that the sun came out just as we reached the top. Having had such a grand day, inspired by Shakespeare, and enthused by incredible vistas, everyone went home feeling exhilarated.

I for one will definitely be returning to Shakespeare’s Globe and The Shard, and feedback tells me both can expect a flood of group interest now too.