Whoopi is back for the very first time as Deloris Van Cartier in the latest stage adaptation of Sister Act. 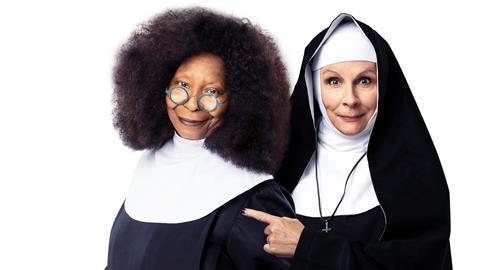 Whoopi Goldberg will be reprising the role of Deloris Van Cartier for the first time on stage.

Upon Sister Act’s release in 1992, the musical-comedy film and its sequel became synonymous with Whoopi Goldberg, who played the lead character Deloris Van Cartier.

After witnessing a murder, singer Deloris’s life takes a dramatic turn. For her own protection, she is forced to disguise herself as a nun and join a convent under the watchful eye of Mother Superior.

The story made its West End debut in 2009 with Goldberg as a producer; until now, she has never reprised the role on stage, although she did make a brief appearance as Mother Superior at the London Palladium performance in 2010.

After successful worldwide tours and a Broadway run, the hit musical has been newly adapted for 2020, with Goldberg producing and starring alongside BAFTA award-winner Jennifer Saunders (French and Saunders, Absolutely Fabulous) as Mother Superior.

The production will be running from 21st July to 30th August 2020, at the Eventim Apollo, London, with ticket prices starting from £29.75.

“This is a very special one-off opportunity created just for London to see one of the most loved actors of our time playing the part she is so famous and so loved for. The addition of Jennifer means that Sister Act truly promises to be the ultimate night of laughs and smiles with two comedy greats.”

When booking, it’s worth noting that Thursday matinee performances will instead include Brenda Edwards (We Will Rock You, Chicago) in the role of Deloris Van Cartier. For information on show times and tickets, head to the website.

Whoopi Goldberg is one of few entertainers to receive all four of the major US acting accolades: