The Comedy About A Bank Robbery extends into 2020

Mischief Theatre’s slapstick comedy play has announced it will now be taking bookings into 2020. 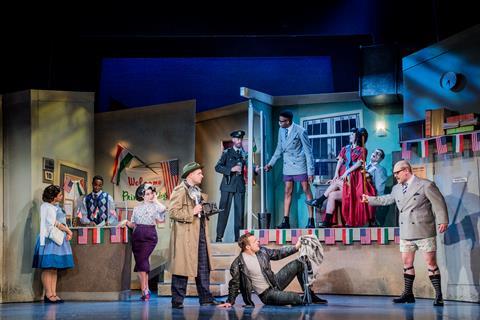 The cast of The Comedy About a Bank Robbery, produced by Mischief Theatre.

The Comedy About a Bank Robbery will now be running until 3rd May 2020, as it celebrates its third birthday in the West End.

Tickets for the new booking period are now on sale, including group tickets. As well as marking The Comedy About a Bank Robbery’s third birthday, Mischief Theatre is celebrating a a bumper year, having announced a new season opening at the Vaudeville Theatre this September, with new shows including Groan Ups and Magic Goes Wrong.

The play takes place in the summer of 1958. Minneapolis City Bank has been entrusted with a priceless diamond. An escaped convict is dead set on pocketing the gem with the help of his screwball sidekick, trickster girlfriend… and the maintenance man. With mistaken identities, love triangles and hidden agendas, even the most reputable can’t be trusted. In a town where everyone’s a crook, who will end up bagging the jewel?

In addition The Comedy About a Bank Robbery UK tour is currently running until 8th June. The company’s first production was The Play That Goes Wrong. The show began on the London and Edinburgh fringe before touring the UK. It then opened in the West End in September 2014 where it is still running at the Duchess Theatre, enjoying its fifth year. It is also playing on Broadway and heading out on a US tour in 2018.

Henry Lewis, Jonathan Sayer and Henry Shields met at The London Academy of Music and Dramatic Art (LAMDA); all core members of Mischief Theatre, they worked in comedy together for several years before starting out as a writing team.