The Royal Air Force Museum has opened new exhibitions at its London and Cosford sites to mark the 80th anniversary of the Battle of Britain. 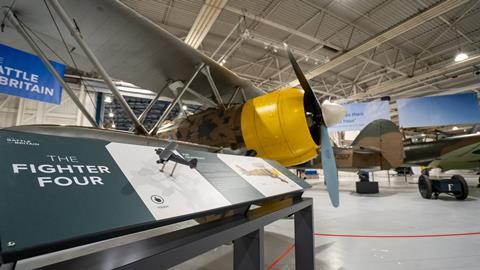 Both RAF Museums have new displays commemorating the 80th anniversary of the Battle of Britain.

Its London museum is home to the most complete set of Battle of Britain aircraft in the world including the ‘fighter four’: Spitfire, Hurricane, Messerschmitt 109 and Fiat CR42, which all took part in the Battle.

For the next year, they will be supported by new displays telling the wider Battle of Britain story such as the role the enigma machine played. A new interactive will explain how the Dowding system worked, challenging visitors to help detect the raids that happened on 15th August, 1940.

Complementing the new display is a year-long art exhibition: In Air and Fire: War Artists, the Battle of Britain and the Blitz which opened on 12th September. It presents more than 50 works of art created in response to the war in the air by acclaimed artists such as Nash, Kennington, Laura Knight, Graham Sutherland, Nessler, Nevinson and Olga Lehmann. Many of these works have never been shown to the public.

Home to the world’s oldest Spitfire, the Cosford Museum houses a collection of both British and German aircraft from the Battle of Britain era. The Spitfire forms the centrepiece of the new display, which also opened on 12th September, where the RAF’s frontline fighters, the Spitfire, Hurricane, Gladiator and Defiant are face to face with their German rivals the Me 109 and Ju88, to tell a coherent story. 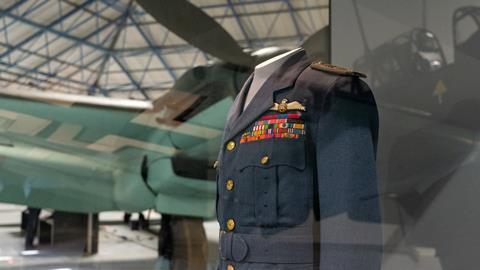 You can see James Nicolson’s flying jacket and medal bar on display - he won the only V.C. of the Battle of Britain.

Previously unseen objects from the museum’s collection including a Rhino suit worn by Defiant pilots, Dowding’s jacket, artefacts from the plotting rooms and medal bars, will share the stories of the people who helped win the Battle, in the air and on the ground.

A highlight of the new display is Flight Lieutenant James Nicolson’s flying jacket and medal bar containing his VC medal, the only VC awarded during the Battle. Nicolson also flew the Spitfire on display at Cosford.

About the Battle of Britain

While 15th September is commemorated as Battle of Britain Day (when RAF Fighter Command claimed what proved to be a decisive victory over the German Luftwaffe) it actually took place from 10th July until 31st October, 1940.

It was a major air campaign fought over southern England and one of Britain’s most important victories of World War Two. Nearly 3,000 men from the RAF took part in the Battle, called ‘The Few’ by Sir Winston Churchill and they were supported by ‘The Many’ tens of thousands of volunteers on the ground.

Groups must book their timed slots for visits, admission is free and there’s also free coach parking. There are currently no guided tours taking place.

There’s plenty for families to enjoy at both sites too. At RAF London there’s a new open grassed landscape perfect for picnicking and at Cosford in Shropshire there’s a hands-on interactive gallery and Black Hawk flight simulator among other attractions.

Both sites are also offering online virtual tours of the museums so you can have a familiarisation visit in advance of a future physical trip.