Television and musical theatre star Sandra Marvin has been confirmed for the role of Deloris Van Cartier of Sister Act The Musical in the upcoming UK and Ireland tour, alongside Lesley Joseph as Mother Superior. 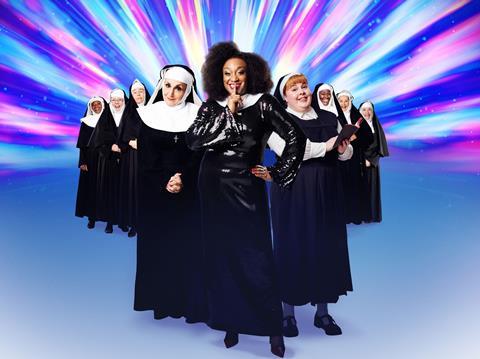 Lesley Joseph and Sandra Marvin will star in the UK and Ireland tour of Sister Act.

Having played Jessie Grant in ITV’s Emmerdale for two years, Sandra Marvin joined the West End production of Waitress. Her other West End theatre credits include Mrs Fezziwig/Mrs Mops in A Christmas Carol at the Dominion Theatre and Miss Motormouth Maybelle in Hairspray at the Shaftesbury Theatre. She also performed with Kate Bush on her 2016 Before the Dawn concerts and features on her live album of the same name.

Lesley Joseph, whose theatre credits include Miss Hannigan in Annie at the West End’s Victoria Palace, is best known for playing Dorien Green in the sitcom Birds of a Feather alongside Pauline Quirke and Linda Robson, recording over 100 episodes during nine years. She has also appeared on BBC One’s Strictly Come Dancing and Channel 4’s Celebrity Coach Trip alongside Linda Robson.

Based on the movie, this tribute to the universal power of friendship, sisterhood and music tells the story of Deloris whose life takes a surprising turn when she witnesses a murder. Under protective custody, she is hidden in the one place she won’t be found – a convent.

Disguised as a nun and under the watch of Mother Superior, Deloris helps her fellow sisters find their voices as she unexpectedly rediscovers her own. Sister Act is produced by Jamie Wilson and Whoopi Goldberg.