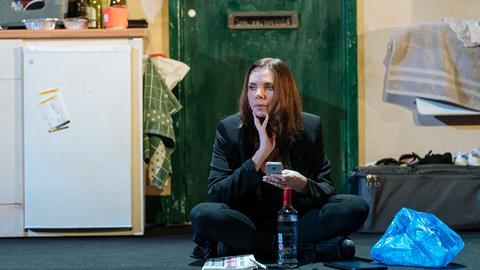 Theatre review… The Girl on the Train

It will have you guessing right until the last minute, says Shannon Clark after going to the opening night of The Girl on the Train’s UK tour.

Having read the book, and seen the film, I was dubious as to how well a story that largely takes place on a train, and in the main character’s head, was going to translate onto the stage. But I needn’t have worried, the stage adaptation did the bestselling story justice and more.

The stage and cast are minimalistic, with just nine actors and six sets but it’s the simplicity that makes this play such a success as the focus remains firmly on the characters’ dark and harrowing tales rather than their surroundings. That said, the train carriage on stage is very effective; simple in its design, it uses impressive screen projections and sound effects, taking the audience with commuter Rachel Watson on her journey to discover the truth.

Unlike the original story, the production begins at the centre of the drama with Megan Hipwell already missing and the police on their way to speak to Rachel Watson as a potential witness. As with all good thrillers The Girl on the Train then works back and forth in time and acts much like a puzzle. You find yourself constantly scrambling for the pieces along with the characters, right up until the last moment.

While the order is different, the story still follows that of Rachel who escapes reality by watching the ‘perfect couple’ she sees through the train window every day. But all is not as it seems, and when she realises that the woman she has been watching is Megan, she’s thrown into the deep end as a witness and suspect.

Using the train, and carefully directed flashes of light, the play switches between scenes, and the past and present seamlessly. A credit to the production team, and a welcome relief to the audience, considering how complex the plot is. 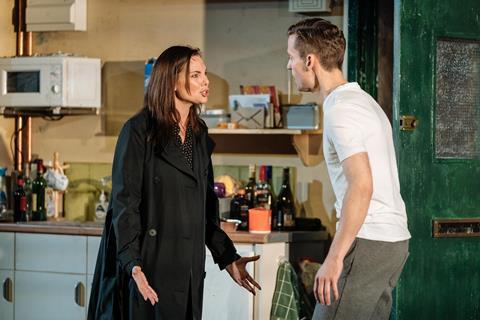 Having said that, much like its other mediums, the play takes a while to build momentum, with the first half setting up the storylines of Rachel, Anna and Megan. During the second half, however, you’ll find yourself on the edge of your seat as the suspense continues right up until the end. This was when the three leading actresses stole the show and their emotional portrayals of difficult subjects including isolation, alcoholism and domestic abuse left many, me included, with tears in their eyes.

Remaining on the stage for the whole play, Samantha Womack’s depiction of Rachel is intense and performed with shocking realism. Her twitches, slurred speech but endearing determination create a well-rounded character that you cannot help but root for, despite her flaws.

The other leading ladies, Lowenna Melrose (Anna Watson) and Kirsty Oswald (Megan Hipwell), cannot go without mention either. While Megan only ever appears as a memory, Oswald’s eerie and emotional interpretation helps to flesh out her character; make sure you pay special attention to her dress too. And despite the fact that Melrose doesn’t appear very often, she gets across Anna’s smug character very well. Detective Gaskell, played by John Dougall, deserves an honourable mention too; his one liners helped to lighten the mood and add a sprinkling of humour into the otherwise dark story.

With so many twists and turns, and strong characters battling within their own stories, The Girl on the Train will have you guessing right until the very end. Drawing a thin line between fact and fiction, groups will have to head to the theatre to find out which is which, and who is telling the truth after all.

The Girl on the Train is currently touring the UK until July 2019. Visit www.girlonthetrainplay.com for more information.

Lead Image: Samantha Womack starring as Rachel Watson in the UK tour of The Girl on the Train. (Photo Credit: Manuel Harlan)