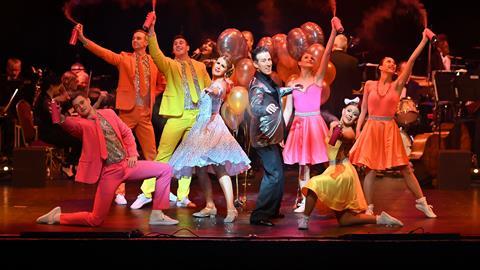 GLT heads to the opening night of the Strictly Come Dancing duo’s new tour for a step (or three) down movie-memory lane.

Charlie Atkinson was among the first to see Anton Du Beke and Erin Boag’s new UK tour - he went along to the opening night at Northampton’s Royal & Derngate Theatre:

‘Anton and Erin: Dance Those Magical Movies’ is the dancing duo’s 13th such tour and lucky for many, they continue to encapsulate all the glitz and the glamour of Strictly Come Dancing; it’s easy to see how they still sell out theatres across the country.

Following on from the success of last year’s musical tour, the latest performance turns its attention to movies which unravelled straight away with an eye-catching medley of silent films and old-time classics, featuring the likes of Laurel and Hardy, The Wizard of Oz and Casablanca. Anton, Erin and their assortment of supporting dancers took the audience on a journey down memory lane in an opening act which would have surely landed them at the top of the Strictly leader-board.

Along with the London Concert Orchestra – who, in my opinion, stole the show with faultless renditions of some of the most famous movie scores, thanks to the imperious conduction of Richard Balcombe – Anton and Erin twirled their way through some of the all time greats, from a moody and intense version of West Side Story to the show-stopping finale of The Greatest Showman.

The classic movie numbers were also note-perfect. The voice of Strictly, Lance Ellington, featured throughout the night, but it was Laure Emmitt who blew the audience away with her covers of My Heart Will Go On and Somewhere Over The Rainbow to name but a few.

“This is so much more than what many would expect to be just a tribute to Strictly.”

While there are plenty of the jokes and laughter you would expect to see on BBC 1, there are times where you are drawn in by the sheer quality and technical ability of these two. Often edgy and gritty, you are always kept on your toes (I couldn’t help myself with that pun, sorry) as the action bounces from an intense salsa to a happy-go-lucky Charleston.

The whole performance is tied together, however, by the wonderful host, Anton du Beke. There is an argument to be made that Anton is the last of a dying breed. The likes of Tommy Cooper and Bruce Forsyth are sadly no longer with us, but their spirit lives on with Anton, the true epitome of an all-round performer. One minute a comedian, the next a singer and then a world class ballroom dancer. His cheek and charm had the crowd cackling at every opportunity he could find, often due to a vast collection of behind-the-scenes anecdotes from being on Strictly for so many years.

Accompanied by the wonderful Erin and her flamboyant frocks – which consisted of 100,000 Swarovski diamonds for just one night – the first show of their new tour went as well as they could have hoped.

I’ll admit, Anton and Erin: Dance Those Magical Movies wasn’t high up on my bucket list but I was blown away by the level of professionalism, technical ability and quality which has enabled the duo to sell out tours for 13 years on the spin.

For more information about the tour, visit www.antonanderinlive.co.uk