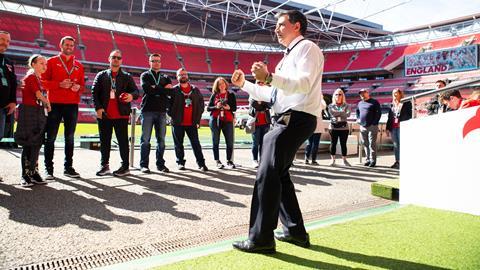 The wonders of Wembley: GLT goes behind-the-scenes on a group tour

GLT’s Harry Rogers was invited to walk in the footsteps of heroes past and present at the home of English football (he didn’t need much persuarding). He reports back on the experience.

It’s a truly wonderful site when you make your way out of Wembley Park Station to be greeted with the imposing site that is Wembley Stadium. It only grows in size when you walk along Olympic Way and up its famous steps to the front entrance, alongside the statue of Bobby Moore – the only Englishman to ever lift the World Cup. 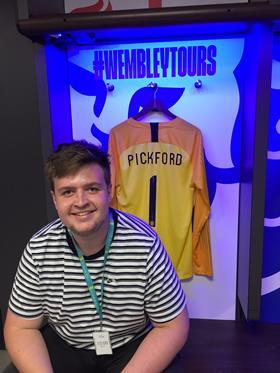 We were given a friendly welcome by the staff on the front desk before heading into the stadium’s permanent exhibitions, displaying historical artefacts, memorabilia and more. You can even see the original crossbar that Geoff Hurst hit in the famous 4-2 win over West Germany in 1966 – of course it was over the line!

Just some of the other highlights include a signed guitar from Ed Sheeran to commemorate his many performances at the stadium, signed NFL jerseys dating back to different American football events and even an original turnstile from the old Wembley.

Our informative guide then took us onto the middle terrace to explain how the stadium was specially designed to enhance sound. To prove the point, our group (consisting of visitors from all over the world, including people from Romania, Brazil, Spain, Israel and Saudi Arabia) were invited to collectively shout ‘hello Wembley’ – the result, a fascinating roar that made its way around the empty ground before reverberating back to us. 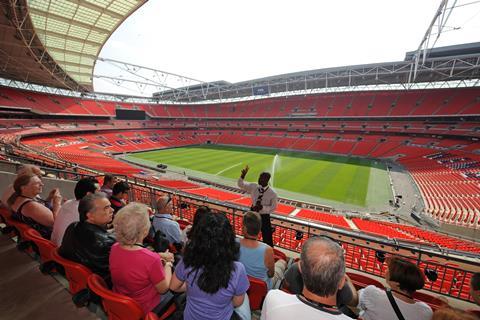 One guide explains how the stadium enhances sound in the ground. 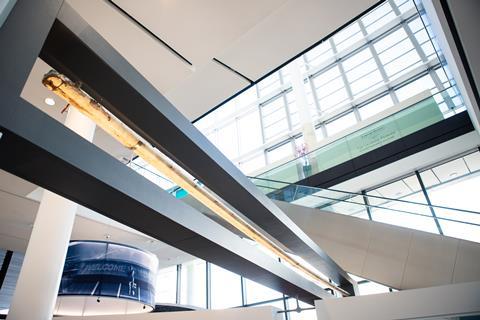 The original crossbar from the 1966 World Cup Final in which Geoff Hurst scored a hat-trick. 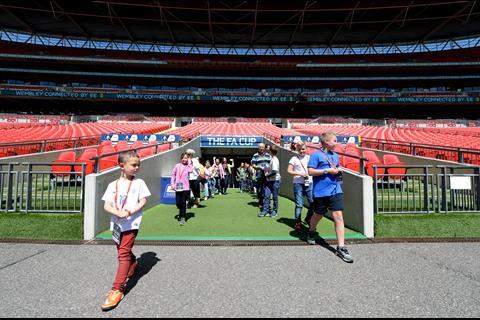 Stepping out onto the pitch at the stadium. 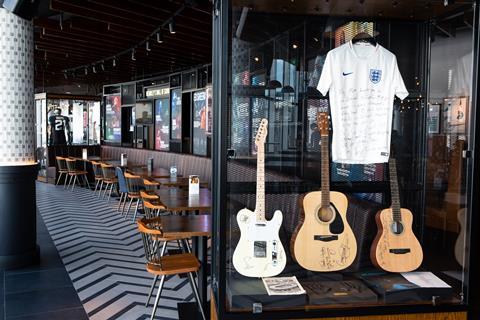 On our way back inside, we caught a glimpse of the original 1948 Olympic flag that once waved on top of one of the original twin towers at the old Wembley, before heading down a long flight of stairs into areas usually out of bounds on event days.

First up was the press conference room, a huge lecture-like theatre where members of the group were invited to take the hot-seat and face the pressure of the ‘media’. A short walk through the side door and we were in the changing rooms, consisting of a fresh champagne smell due to Warrington Wolves celebrating their Challenge Cup Final win just the day before. The white board in the room was even signed by the manager himself and read “Thank you Wembley. Unbelievable experience. On behalf of Warrington Wolves.”

The changing rooms were something else, incredibly spacious and luxurious compared to the norm the further down the leagues you go. There were several photo opportunities with replica shirts hanging in the room, some of which have been signed by current England football stars, as well as the chance to see where the team shower after the match and where they’re treated by the physios.

Our personal highlight had to be lining up in the tunnel. It’s not every day you stand in the footsteps of so many sporting idols from across the world. As we slowly strolled through the doors and out onto the hallowed surface, crowd noises projected from the PA to make the experience that little bit more believable.

We took a quick seat in the dugout, taking in the fine pitch side views before making the victorious walk up the steps to the Royal Box to collect the FA Cup – well, a replica version, but that’s not the point! The view from the top of the steps is breath taking, and you can only imagine how it must look when lifting a real trophy in front of a full house. It was extremely special to also sit in the actual Royal Box as no amount of money in the world will get you a seat there, you must be exclusively invited.

More photo opportunities were had and then the group dispersed after a hugely enjoyable day. Group bookings are welcomed, with 15 or more qualifying for discounted entry.