The Newton Abbot Travel Club’s mystery tour ended up at the ‘See Monster’, a retired rig from the North Sea which has been transformed into an installation in Weston-super-Mare.

Organised by Richard and Carol Swiecicki, the October trip was a mystery tour so members didn’t know where they’d be visiting. 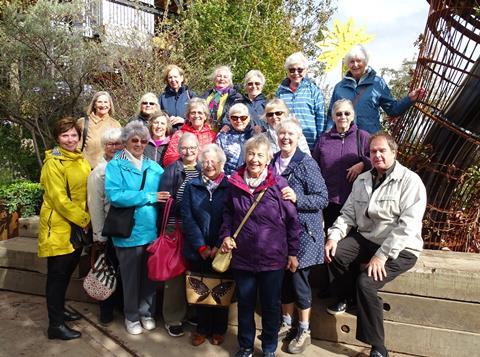 The group had no idea where they were going… and then couldn’t wait to tell everyone about their experience.

Carol reports back about the experience and how it went:

We had a coffee stop at Glastonbury where it was also market day so quite a few purchases came back on the coach before our final mystery destination.

We had gone to see the SEE MONSTER, which is part of the Government’s UNBOXED, UK’s largest public art installations to inspire global conversations about reuse, renewables and the great British weather.

SEE MONSTER is actually a retired rig from the North Sea which is only in Weston until 5th November and then will be scrapped. 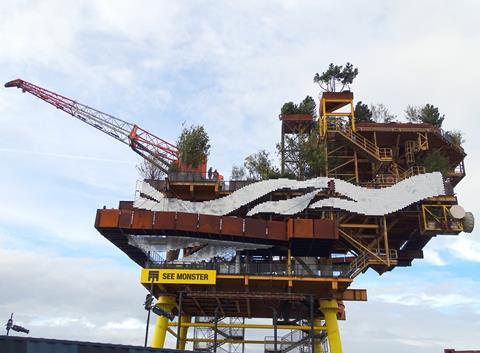 The SEE MONSTER is a retired rig from the North Sea which has been transformed into one of the UK’s largest public art installations in Weston-super-Mare.

As you go on different levels of the rig besides enjoying wonderful views, there are trees and areas planted out, a waterfall which wasn’t on when we visited due to the wind and even a slide which members even in there 80s tried out!

Afterwards, we visited the pier and enjoyed some refreshments before travelling home. Nobody guessed the mystery visit to the SEE MONSTER and all were keen to tell their friends and families about the experience.

After a lifetime weathering the stormy North Sea, the retired rig was given a different lease of life on the coastline in Somerset. Weighing in at 450 tonnes, the Monster is 35 metres high. Visitors have been able to travel up and inside the rig; there’s even a 10-metre waterfall and wild garden.

In 2019, Carol was awarded a British Empire Medal (BEM) for services to the community. She has been a GTO for almost 20 years, since taking early retirement.

Carol started out organising a few trips for friends which grew to running about 50-70 trips a year pre-Covid. In an interview, she previously told us the main thing as a GTO is ‘not to panic but to be the swan serene on top and call it an adventure’.

Tell us about your mystery tours…

We’d love to hear the quirky places you’ve been with your group. Get in touch by emailing editorial@groupleisureandtravel.com or call us on 01908 613323.