Kate Ballenger, head of house and collections at Blenheim Palace in Oxfordshire has selected her ten favourite paintings for visitors to look out for on a tour of the State Rooms and the Private Apartments. 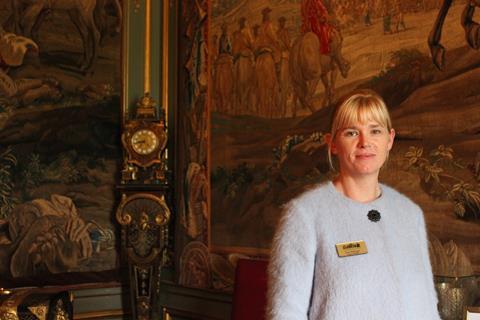 Kate Ballenger, head of house and collections at Blenheim Palace picks out her favourite artworks.

Groups can discover 300 years of history and heritage at Blenheim Palace on a tour.

Home to the Dukes of Marlborough since 1704, the UNESCO World Heritage Site was a gift from Queen Anne following the victory at the Battle of Blenheim and houses artworks that depict both military history and insights into aristocratic family life.

1. A Nymph Attended by Two Putti by Henri Fantin-Latour, located in the Upper South Corridor in the Private Apartments

Henri Fantin-Latour was a French painter and lithographer. Famous for his still-lifes and portraits, he was rooted in the tradition of the realistic manner of the old masters, but his style placed him amongst the impressionists. Fantin’s many lithographs and paintings were inspired by imaginative themes and a romantic nature.

2. The Tiger by George Stubbs, located in The Smoking Room in the Private Apartments

Stubbs, born in Liverpool and entirely self-taught is considered one of the most well-known animal painters of the eighteenth century. The Tiger is one of the finest examples of his work.

The tiger in the painting was presented to the 4th Duke of Marlborough in 1762 by Lord Clive, the Governor of Bengal.

A butcher’s bill for that year includes meat for the tiger; 24 pounds of beef was delivered every two to three days at three shillings a time.

Stubbs painted three portraits of the animal. It is assumed that the first one to be painted was this portrait, still at Blenheim. The largest of Stubbs’ three versions sold for £7.9m in 1995 at Christies.

3. Mary, 10th Duchess of Marlborough by Becker, located in the Great Hall of the State Rooms

The painting was described by the diarist Chips Cannon as “an efficient Duchess, handsome, gay, and serious-minded, very English, very balanced, very conventional and brings up her children in a rather snappy, almost spartan simple way: and they adore her.”

Kate, added: “I believe this elegant portrait by Becker captures the strength of her character perfectly.”

4. Margaret Lemon as Erminia by Sir Anthony van Dyck, located in the Red Drawing Room of the State Rooms

Sir Anthony Van Dyck became the leading court painter in England, most famous for his portraits of Charles I of England and his family. Margaret Lemon was known to be Van Dyck’s model and then mistress. The portrait depicts Margaret Lemon has Erminia.

Margaret Lemon was described as extremely passionate and violently jealous, even on one occasion allegedly attempting to bite Van Dyck’s thumb off to prevent him from painting ever again.

5. Gladys Deacon by Cecil Beaton, located in the Grand Cabinet of the State Rooms

Gladys Deacon was an American who married into the English Peerage without actually being an heiress. She destroyed her beauty by early attempts at plastic surgery. The pastel drawing was part of series done for vogue. Gladys attracted numerous admirers, but she decided from an early age that she would marry a Duke, and preferably the 9th Duke of Marlborough. 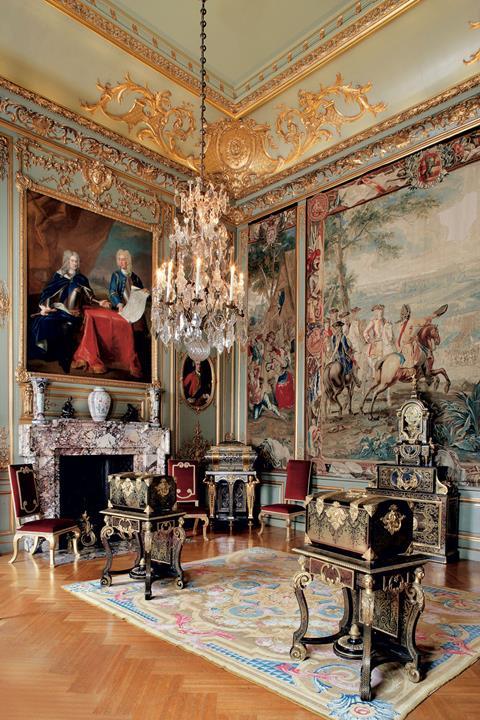 Part of The State Rooms at Blenheim Palace.

6. The Adoration of the Magi by Carlo Dolci, located in the China Ante Room of the State Rooms

Displayed above the door of the China Ante Room, this piece is missed by many visitors. Every detail has been well executed and the colours vibrant, despite the painting being more than 350 years old. Carlo Dolci was an Italian Baroque artist who specialised in highly finished religious pictures.

7. The 4th Duke and Family by Sir Joshua Reynolds, located in the Red Drawing Room of the State Rooms

Sir Joshua Reynolds was a well-known English painter and the founder of the Royal Academy of Arts. This portrait of the 4th Duke and Family is one of the largest in Blenheim’s collection and has many different features. The piece has the 4th Duchess in the centre of the painting, the Duke is seated to the left and includes six of their eight children - two had not been born.

The 4th Duchess’ extravagent hairstyle in the painting was constructed using chicken wire, papier mâché and false hairpieces. When she rode in a carriage she had to sit on the floor because it was so tall.

8. High Lodge by John Piper, located in the East Corridor of the State Rooms

The 11th Duke of Marlborough is said to have been to a friend’s house when he first saw the work of Oxfordshire based artist John Piper. He admired the work so much he immediately wrote to the artist and requested he come to Blenheim Palace. Piper painted Blenheim 12 times during his career and the palace still has them as part of the collection, displayed in both the State Rooms and the Private Apartments.

9. Blenheim Prize Fruit by George Lance, located in the Lower Entrance Hall of the State Rooms

A single pineapple was said to have been worth £8,000 in today’s money. Blenheim’s greenhouses still produce a veritable bounty today.

10. Consuelo, Duchess of Marlborough by Ambrose McEvoy, located in the Great Hall of the State Rooms

McEvoy’s portrait of Consuelo (formerly Vanderbilt) was painted in 1916. Consuelo was only 17 when she came to Blenheim and had no wish to marry anyone but was forced into the marriage by her mother. Her husband to be, the 9th Duke also married not for love but for the sake of Blenheim. The loveless marriage lasted until 1921 with Consuelo doing her duty producing two sons, but then the pair separated and ultimately divorced.

The State Rooms are part of the Palace, Park and Gardens ticket, with group discounts available. For more information about visits go to www.blenheimpalace.com