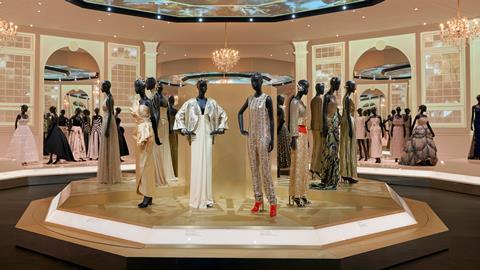 Glorious gowns at the V&A

Not to be confused with a contemporary high street fashion chain of the same name, in 1947 French couturier Christian Dior revolutionised fashion with his New Look. Offering a radical alternative to the boxy, masculine style of women’s fashion after the Second World War, his creations caused a sensation, and transformed the female silhouette. Comprised of an exquisitely sculpted off-white silk shantung jacket, a black pleated full wool skirt and hat, the so-called Bar suit has become the emblem of Dior’s New Look style.

I was fascinated to see this iconic outfit and subsequent timeline of his influential designs at the newly opened exhibition at London’s V&A. The largest and most comprehensive exhibition ever staged in the UK on the House of Dior, Christian Dior: Designer of Dreams traces the history and impact of one of the 20th century’s most influential couturiers, and the six artistic directors who have succeeded him, from 1947 to the present day.

If any of your members are dedicated followers of fashion, they will love this exhibition which comprises more than 500 exhibits - mainly clothes along with accessories, sketches, films and fashion photography. Be prepared to marvel at the hand-span waistlines of the jaw-droppingly elegant dresses. The only things that would have fitted me were the hats and some rather curious designer knee pads from one of the more recent Dior collections!

Divided into 11 beautifully curated sections, my particular favourites were the ten defining looks made between 1947 and 1957, during Christian Dior’s tenure at the house. These include clothes influenced by gardens and periods of history such as the 18th century.

It was interesting to learn about Dior’s fascination with the British culture. He admired the grandeur of our great country houses and gardens and also had a personal preference for Savile Row suits. His first UK fashion show took place at London’s Savoy Hotel and in 1952 he established Christian Dior London.

One of the exhibition highlights is a dress worn by Princess Margaret on her 21st birthday. Christian Dior first met the princess in the spring of 1949 when she visited the Dior salon during her first European visit. The following year Dior put on a special show for Her Majesty The Queen, Princess Margaret, Princess Marina the Duchess of Kent and Princess Olga of Greece, at the French Embassy in London. Alongside the dress is a photograph of Princess Margaret wearing it which was taken by Cecil Beaton for her official birthday portrait. The princess remained a client of the House of Dior for many years. The display also includes dresses worn by Margot Fonteyn and actresses Jennifer Lawrence, Charlize Theron and Lupita Nyong’o, and one of the sections is dedicated to a dream-like collection of ball gowns

Another enthralling display area provides an insight into the ateliers; the workrooms where seamstresses, called petites mains, turn ideas into exquisite haute couture garments. The tradition of haute couture demands that garments are almost entirely made by hand, often taking hundreds of hours to create. Once Christian Dior had created his sketches, they were sent to the ateliers to be turned into a toile. This test garment, usually made in cotton fabric, allowed for the fit, construction and shape of the design to be checked. Once it had been adjusted, fabric and embellishments were chosen, and the garment was made, fitted to a model, and shown on the catwalk. These exacting processes continue unchanged today.

The exhibition runs until 14th July and tickets are priced from £20. To make a day of it GTOs can also book a private group tour of the highlights of the main V&A museum. There are coach drop off and pick up areas on Cromwell Road, outside of the V&A.